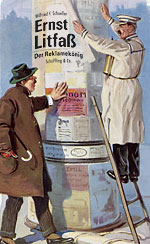 Ernst Litfass was all things rolled into one: printer, actor, inventor, poet, impresario and event manager. Above all else though he was the king of advertisements of the 19th century. He was the person who introduced advertising pillars for public notices and posters; he was the person who invented the advertisement for products and for happenings. Exactly 150 years ago the first so-called Litfass advertising pillars were erected – today it’s hard to imagine the make-up of a street without them.

Wilfried Schoeller unravels the story of an unprecedented career and the portrait of a genuine Berlin character at the time when advertising images took on considerable power.

»Wilfried F. Schoeller has created a masterpiece. With esprit and ironic sympathy, he paints an ideosyncratic portrait of advertising genius Litfass.«
Süddeutsche Zeitung

»Brilliantly capturing the upsurging spirit of the time, Wilfried F. Schoeller shows up the Prussian state with biting elegance and draws an amiable portrait of the self-reverent ›King of Advertising‹.«
Neue Westfälische

»A colorful, vivid and impressive portrait, not failing to point out those aspects yet unknown to the public.«
Neues Deutschland