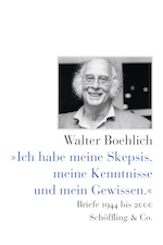 Walter Boehlich
»I have my skepticism, my knowledge, and my conscience.«

was a unique literary go-between. Boehlich was an intellectual who rescued the literary legacy from the upheavals of the twentieth century and subjected it to critical re-appraisal. In addition to this lifetime achievement, Walter Boehlich—the editor-in-chief of the Surhkamp Verlag publishing house from 1957 to 1968—left behind extensive correspondence, which began in 1944 with a letter to his mother, who had been deported to Theresienstadt, and ended only in 2000. In his letters to authors, editors, and publishing houses, Boehlich expresses his belief that the critique of language and literature is also a critique of society. For him, philological conscientiousness and moral responsibility go hand in hand. At the same time, his letters are polished, witty, and intellectually sparkling: reading them is a never-ending delight.
For Boehlich’s 100th birthday, Christoph Kapp and Wolfgang Schopf have edited an annotated, richly illustrated selection of Boehlich’s letters to Ingeborg Bachmann, Gottfried Benn, Wolfgang Koeppen, Theodor W. Adorno, and many others.

»Walter Boehlich was an exacting reader, eloquent and sometimes polemic, and in his essays and columns a sharp-tongued commentator on current affairs.«
NZZ

»This panorama unfolds into a short literary history of the German post-war period.«
Frankfurter Rundschau