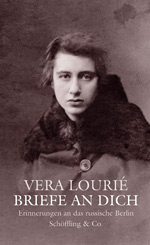 Vera Lourié
Letters to You

Memories of the Russian Berlin
memoir, fiction
with numerous photographs

Berlin, 1920s – between bohemia and National Socialism:
»The Letters of rediscovered Russian poet Vera Lourié are a testament of survival and a piece of cultural history.«
DIE ZEIT

In the beginning of the 1920s about 360,000 Russians were living in Berlin, escaping the October Revolution to a very affordable Germany – attracting especially the artists and writers: Gorki, Belyi, Jessenin or Marina Zwetajewa, Chagall, Lissitzky or Kandinsky. And among them all: Vera Lourié.

Lourié survived the Nazi era despite contacts to the German resistance and her mother’s arrest by the Gestapo and imprisonment in Theresienstadt concentration camp. Her quick wits helped her when the Soviet army invaded Berlin, as it was not well disposed towards bourgeois Russian refugees. She lived through the poverty and hunger of the post-war years and faded into obscurity, until she was rediscovered as a writer and a historical witness and fell in love again in her old age.
Spurred on by her emotions, Lourié wrote her memoirs, which are now published in full for the first time with additional autobiographical texts, documents and photos.


The Editor
Doris Liebermann, born in 1953, lives in Berlin. She studied Eastern European History and Slavic Studies and worked as an author for radio, television and print media. She met Vera Lourié in the early 1980s while interviewing her for radio shows and a movie about the Russian Berlin of the 1920s.

»In her letters, she tells of the most unbearable things, but with a voice so effortless and absorbing that you just cannot stop reading.«
Frankfurter Allgemeine Sonntagszeitung

»The letters of rediscovered Russian poet Vera Lourié are no less than a document of survival and a piece of cultural history.«
ZEIT online

»A true report about surviving the 1930s and 40s in Berlin – until being finally liberated by her soviet compatriots.«
Berliner Tagesspiegel

»These sensitive and warm-hearted memoirs by the poet Vera Lourié cast light on conditions in pre-revolutionary Russia, as well as evoking pre-war Berlin when the brilliant Russian emigré community were culturally active.«
New Books in German

»Letter after letter, in touching images and fragments and more associatively than chronologically, she tells her lover the story of her life. And what a life that was! Reducing her past to the time in the ›Russian Berlin‹ of the 1920s would be doing wrong to this biography that is filled with breaks and new beginnings: Vera Lourié has seen the whole 20th century.«
Westdeutscher Rundfunk (WDR3)

»A marvellous portrait of the literary Russian Berlin of the 1920s and of post-war Berlin by a contemporary witness. (…) She gives an intriguing and genuine account of the horrors she experienced yet maintaining a light-hearted tone, which makes readers smile at the heroine's audacity and courage. Being that close to the writer makes LETTERS TO YOU a thrilling and exciting read.«
Kulturportal Russland

»We have been deprived of this voice for too long!«
fixpoetry

»Her letters read like pieces of literature despite their private character. They are well-observed and full of atmosphere, restrained in judgement, sometimes humourus, rarely bitter.«
Neues Deutschland