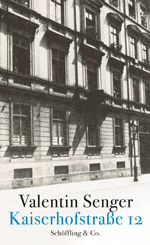 with an afterword by Peter Härtling

The 1930’s: On Kaiserhofstrasse in Frankfurt/Main live actors, transvestites, ladies of easy virtue, members of student fraternities – and the Senger family. Because they were Jews and Communists they had fled Tsarist Russia and found a new home here – until Adolf Hitler seizes power in 1933. Valentin Senger’s mother recognises the seriousness of the situation early on. With forged documents she conceals the traces of her origin. But the fear of being uncovered is now with the family every day.

Young Valentin Senger goes his own way and falls in love for the first time. But how can he become more intimate with the girl without risking the survival of the whole family? His mother is sick with worry. With the help of numerous friends, neighbours, courageous officials and a large amount of luck the family gets through this terrifying time.

»If there were any miracles in the twelve years of Hitler’s rule, then the charmed survival in the middle of Frankfurt of a Russian-Jewish family with Communist links is surely one of the biggest.«
Neue Zürcher Zeitung

»This book tells a story so precisely and soberly that there’s no doubting its truth.«
Frankfurter Allgemeine Zeitung

»Filled with local colour and atmosphere, filled with humour and irony, and at the same time, filled with anxiety, this book contains nearly all shades of character that could be found in Germany at this heroic-criminal time. It is a book without suspense, one could argue, because we know it has a happy ending, yet it reads like the best of suspense novels.«
DIE WELT

»An authentic piece of contemporary history that, very clearly, very vividly, and with a hint of humour, tells much more about everyday life in the Third Reich than a stack of history books.«
ZEIT Magazin

»It’s Valentin Senger’s own story that he tells with ease and a lot of Jewish humor, full of captivating episodes that could be called ›novellesque‹ or ›boccacciesque‹ - if it were not for the fact that they are true, that they tell of real people who suddenly disappear and never return.«
Süddeutsche Zeitung

»The survival of the Senger familiy right in the middle of Frankfurt on Main is nothing short of a miracle. It is a blessing that this book is available again.«
BRIGITTE

»Senger’s KAISERHOFSTRASSE 12 not only tells the exciting stoy of his family, it stands as a chonicle of life under National Socialism as witnessed by one who, considering the circumstances, should not have lived at all.«
Frankfurter Jüdische Nachrichten

»Tells of Frankfurt’s darkest hours and places (...). KAISERHOFSTRASSE 12 might be the only document to keep the memories of its many places and people.«
Frankfurter Allgemeine Zeitung

»Secrecy was an art that Senger’s mother carried to perfection, and it became the family’s warrant for survival. (...) An important historic document of life under Nazi terror, and a plea for empathy.«
Frankfurter Rundschau

»Senger has now written the incredible story of how he and his family survived those years of terror. His story is so remarkable that he is worried that people simply will not believe it.«
The German Tribune

»It is a wonderfully told story, an unforgettable view of a German street and its inhabitants under the pressures of fascism and war. It ought to be a triumphant story. But it is not. Valentin, like so many of the others, still suffers for his ›survivorship‹.«
The New York Review

»Kaiserhofstrasse was – and still is, for that matter – a microcosm of a big city.«
The Bookseller

»Valentin Senger tells an amazing story, one that anybody would find difficult to believe. Through a combination of unusal luck and caution, the Senger family – Russian Jews who lived in Frankfurt – lived through the war in Germany in the open. At a time, when millions of Jews, half-Jews and quarter-Jews were being rounded up and dispatched to concentration camps and ghettos, the Sengers were not touched by the Nazis. Their neighbours knew they were Jewish, but for some strange reason, they did not breathe a word of it to the authorities.«
The Canadian Jewish News

»In a series of evocative, spare sketches, the author describes a world which is both terrible and sweet, nostalgic and nightmarish.«
Celebrity Bulletin

»This book seems like an attempt at catharis.«
Kansas City Star

»By keeping it to the microcosm of one small family and one small neighborhood in Frankfurt, Senger has translated those early happy and later fear-filled days into a piece of all humankind.«
The San Diego Union

»What the author of KAISERHOFSTRASSE 12, Valentin Senger, tells is an almost incredible tale. In an artless, straightforward and no-nonsense way he describes how he himself and his family survived in the face of nearly impossible odds. (...) Yet thirty years after the events described, the author manages to give us a blow-by-blow account of how he and the remaining two members of his family survived the Holocaust right in the heart of Hitler’s Germany.«
World Literature Today

»Of all the memoirs by Holocaust survivors the tale told by Valentin Senger is among the most bizarre. It relates how a Jewish family lived in Frankfurt throughout the period of the Third Reich without going underground!«
Book Review by Prof. Arnold Ages

»The Readers fascination stems from the tension between Senger’s perception of self and his actual unacknowledged courage. That tension determines not only what Senger’s memory selects to relate, but also how it is related. The incongruity between them and reality gives a surreal quality to much of the work.«
Jerusalem Post