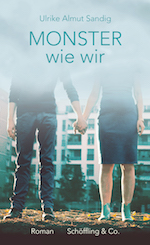 Ruth plays the violin and is scared of vampires. She’s growing up in a vicarage way out in the East German sticks. But God is no party secretary, and it’s no good seeking his protection. Her best friend, Viktor, has a globe of the moon and a furrowed face. He’s only afraid of his bastard of a brother-in-law. But then he finds this switch in his head, a switch that makes him not feel anything at all. And suddenly he’s the one to be feared.

Both of them know the meaning of violence. In their corner of East Germany, where brown-coal mining has devoured whole villages and forests, you’re better off helping yourself. Viktor does sit-ups every day and shaves his head. Nobody understands why someone like him would go to France as an au-pair, but for Viktor anywhere is better than home. And Ruth? Her escape is playing the violin.

Yet no matter where they go, violence catches up with them. When will Ruth look up from her violin? And, most importantly of all: how can they save each other?

In glittering prose set to a hard beat Ulrike Almut Sandig offers a portrait of a generation shaped by upheavals and changes, by the loss of identity and the search for self-determination.

»With her novel Monsters like us, Ulrike Almut Sandig subtly maintains the balance between poetry and horror.«
Andreas Platthaus, Frankfurter Allgemeine Zeitung

»I read the book as a parable of the East German genesis of violence, as "The White Ribbon" of the GDR.«
Jan Drees

»Monster like us is an eloquent novel, that tells in a sensible and impressive way of violence – and how it continues to have an effect.«
Timo Dallmann, MDR Kultur

»Sandig has found a visual world and vocabulary that is associative and leaves the victims their dignity.«
Christoph Schröder, Deutschlandfunk Büchermarkt

»The poet has a lot to tell and can do it too – as her brilliant debut novel shows.«
Carsten Otte, taz.de