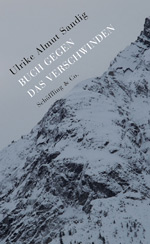 Amid the unrest in Istanbul’s Gezi Park, a young journalist tries to cast off the expectations of his mother, who was bitten by the travel bug after the Berlin Wall fell in 1989. A hiker gets lost in the ancient, enchanted forests of the Engadine during a snowstorm. A little girl is flown by her grandmother to the end of the world during the transit of Venus. Where their traces lead is one of the many puzzles of these stories.

In her colourful and poetic prose, Ulrike Almut Sandig describes places that only appear to be gone. In reality they live on in the experiences of the elderly and the hopes of the younger generation. Relationships are buffeted by the storms of these stories, and deceptive certainties come unravelled. In her new book, Ulrike Almut Sandig uses the magic of storytelling to prevent whole worlds disappearing from our consciousness.

»BUCH GEGEN DAS VERSCHWINDEN shows how language protects against loneliness and lostness. (...) If language sounds like that of Ulrike Almut Sandig, there is no more loss.«
DIE ZEIT

»The idea behind her stories, which is also inherent in the title of the book, unfolds with great energy: Sandig writes about things getting out of control and disappearing, and in this very process puts them back in order. BUCH GEGEN DAS VERSCHWINDEN derives it’s narrative strength from this dialectic contrast.«
Der Tagesspiegel

»Sandig's seemingly even, pictorial, smooth language knows sentences that destroy and change everything. With her very own weapons of art she fights disappearance.«
Frankfurter Allgemeine Zeitung

»A book to make you swoon, romantic in a contemporary fashion, full of unsolvable riddles, simply beautiful. No, not only beautiful. These stories about disappearing – and at the same time directed ›against disappearing‹ – are also melancholic, angry, and touching. (...) Ulrike Almut Sandig has an amazing language, and she has obviously looked deeply into the human soul. It is the subtext of creational history, however, that lends her BUCH GEGEN DAS VERSCHWINDEN a timeless quality. You feel slightly out of balance while reading it – a good and complex feeling.«
Süddeutsche Zeitung

»Soundly composed and spinkled with fresh, poetic images. Sandig is aware of the power of language.«
DIE WELT

»Oscillating between realism and fairytale, BUCH GEGEN DAS VERSCHWINDEN shows people standing at crossroads in their lifes. At the same time it offers a concise poetics of narration: Storytelling as a means of consolation, a cushion against reality, a means of identity formation. (...) In intense, lyrical language, with glimpses of dry humour Sandig creates mysterious realms and offers new perspectives.«
Neue Westfälische

»These stories require a reader’s full attention, they are far from mainstream prose.«
Mitteldeutsche Zeitung

»Her soft and graphic language forms sentences of concentration and change. Equipped with the unconventional weapons of art she faces the threat of disappearance, talking about relationships in different tones.«
Stuttgarter Zeitung

»Ulrike Almut Sandig is a master storyteller who writes in beautiful poetic prose.
(...) Her self-conscious writing style adds to the charm of the stories, encouraging the reader to share in the creative process. Sandig’s perfectly poised narrative continues at just the right pace for readers to appreciate the exquisite detail of her writing. This innovative collection is an absolute delight from start to finish.«
New Books in German

»You can feel Ulrike Sandig’s poetry shine through these texts: the desire to explain the essence of things in a poetic way. Her usage of words makes you sigh and leaves you dizzy and yearning.«
Badische Zeitung

»This author is watching and listening very closely, she enters the mind of her protagonists, is talking out of and with them. All this in a tightly yet finely spun poetic language.«
Leipziger Volkszeitung online

»Ulrike Almut Sandig tells stories about disappearing that are profound and enigmatic. These are not easily consumable prose but narrations that need to be read with attention, else their subtleties may slip away just like the people they portray. (...) Her figures gradually lose their ability to differentiate between reality and imagination, inevitably drawing the reader into these six stories that are thematically complex yet easily readable.«
Berliner Zeitung

»As volatile as the wind and as big as eternity, the melancholy of incomprehensible losses is reflected in Sandig’s short laconic sentences.«
Frankfurter Rundschau

»The clear, flowing language (...) is simple, evocative and tight. (...) Reading only a few pages will make you want to reach out to your loved ones, because they might disappear one day.«
fixpoetry