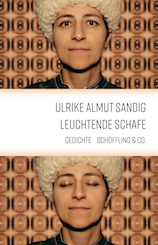 In the beginning there was light—or was it just the Lumières? In Ulrike Almut Sandig’s new volume of poetry, it is but “fire, earth, water, and a jump” away from the creation of the world to the symphony of the Berlin metropolis. There one must take a stand on Lampedusa and say “no” to the refrigerator light and Germany as a short-term refuge. Can luminous sheep watch over our darkest hours, when we fear a God who appears before us as a gym teacher with a whistle, mothers with eyes like cocoa, or the creation of our sovereign selves?
Sandig’s new writings are not just visual poesy on paper but loops in our ear and cinematic explosions of imagery for all of our senses. Using speech recognition software, she tackles the poetry of German Romanticism and captures the flip-side of colonialism in artful anagrams. Above all, in Luminous Sheep the poet once again creates a “world full of mythic images that bury themselves deep into consciousness” (Matthias Ehlers, WDR).

»Ulrike Almut Sandig [travels] through time, gathers impulses for her 'play with words' and rubs up against the discourses of our present in a variety of ways with her own love of experimentation and language.«
Monika Vasik, Die Presse


»Ulrike Almut Sandig is one of the special talents on the contemporary poetry scene.«
Anton Thuswaldner, Salzburger Nachrichten

»The poetry collection is rich in variation, both in terms of style and subject matter.«
Christian Eidloth, ekz-Publikation