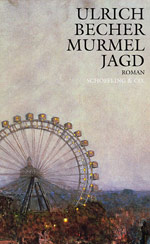 
March 1938: The Viennese journalist Albert Trebla, fighter pilot in the First World War, flees from Nazi-occupied Austria to neutral Switzerland. But for the persecuted there is no refuge in the Swiss Alps and he feels threatened by a series of mysterious deaths. Like a groundhog Trebla tries to look for cover, but wherever he is he gets entangled in absurdity.

With THE WOODCHUCK HUNT one of the great German novels becomes available again – a parable of a mad, disturbing time; about delusion and peril, flight and expulsion and a life in exile.

»Ulrich Becher's THE WOODCHUCK HUNT – one of my all-time favourites, in a dashingly new edition (…). You won't find a funnier, more tragic, more thrilling and spiritedly written book. You will laugh and cry, you will have sleepless and marvelling nights and you won't be able to imagine how you could live without knowing this book. What else do you want?«
Eva Menasse, DIE ZEIT

»An epochal novel. (...) THE WOODCHUCK HUNT is one of the best books that have been published in the German language after 1945.«
Neue Zürcher Zeitung

»This book, once you’ve fallen for it, becomes a life-long drug. It is like a space ship, capable of leaving time and space, departing into the oddest, most hilarious and menacing realms. It is one of those very rare books that seize you with almost physical violence, make you hear, smell, taste, suffer their story.«
Eva Menasse, Die Welt

»Readers will breathlessly follow this dark age novel, thanks to the eminent wit, self-mockery and deep black humour of this narrator. It features delightfully eccentric characters and scenes of grotesque folly.«
Frankfurter Allgemeine Zeitung

»Becher’s magnum opus stands for everything that characterizes this author’s work: His wit of language, his talent for word creation, his power of observation and literary dissection.«
Frankfurter Allgemeine Sonntagszeitung

»The book of the year 2011 certainly is Ulrich Becher’s THE WOODCHUCK HUNT. I have not read such a brilliant book for years.«
Juli Zeh, Süddeutsche Zeitung

»With this voluminous novel, akin in its meticulous construction to the works of the old masters, Ulrich Becher has written his magnum opus: An inventive and fact-laden read with strong characters, in which recent history is mixed with fictitious fates to produce an exemplary story.«
SPIEGEL

»Is it permitted to laugh about the horrors of national socialism? As for the cast of Ulrich Becher’s narrative, they do, piercingly and extensively, like a reflex. THE WOODCHUCK HUNT is a turbulent, dizzying struggle of words, and the novel of a lifetime.«
Frankfurter Rundschau

»Where is there a German storyteller today whom one can charge with an overabundance of reality? Are they not more often a bit thin-blooded, too reflective, somewhat meager in their passion? Becher’s unique position consists in being the opposite pole.«
Süddeutsche Zeitung

»A tour de force on expulsion and exile, a novel about life under exceptional circumstances, a fantastic story.«
Dresdner Neueste Nachrichten

»A masterpiece. (...) In an oceanic narrative flow, Becher captures the horrors of the era with linguistic folly, he interlinks life stories with irony and fantasy, and at the same time tells a love story that is as subtle as it is refined.«
Tages-Anzeiger

»The novel alternates between a surprising crime story, a novel of marriage and psychological analysis, and a sweeping work of memoir that, notwithstanding its humurous undertone, keeps its focus on the issue of facism.«
Aargauer Zeitung

»One great writer to be discovered. If not now, when?«
BRIGITTE

»Becher is a sharp-tongued storyteller, a moralizing tale-spinner. (...) His changing of themes is downright virtuoso - from biting satire to comedic-grotesque dialogue.«
Augsburger Allgemeine

»Becher works magic in turning the flight of an individual into a well-rounded, spot-on picture of the era.«
Frankfurter Neue Presse

»Don’t read it too quickly, only ten pages a day. I want this book to never end. (...) An expressionist masterpiece.«
Eva Menasse