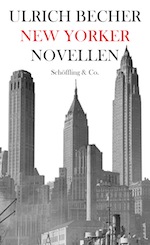 Cycle in Three Nights
stories, new
first published in 1950
Edited and with an afterword by Moritz Wagner

This new edition of the New York Stories, first published in 1950, rediscovers a major work of German-language literature written in exile.

NEW YORK STORIES. CYCLE IN THREE NIGHTS, begun in New York in 1945, includes the three novellas »Nightingale Wants to Fly to His Father«, »The Black Hat« and »The Woman and Death«.

Hans Heinz Nachtigall, who undergoes a fairy-tale rise from unsuccessful poet to sought-after psychiatrist among the New York upper class, feels guilty about leaving his father behind in Europe; jovial stockbroker Alois Altkammer, who arranges a bizarre ceremony for his deceased wife; Jewish concentration-camp inmate Dr Klopstock, robbed of his hearing; or pilot Happy Slocum, returning from the war: Becher’s stories are about solitary outsiders, marked by the experience of dislocation, who are trying to make a fresh start, artistic or otherwise, in a foreign country.

Writing with a dark sense of humour that shifts between the satirical and the grotesque, Becher searingly explores an era of dehumanisation twenty years before his masterpiece The Woodchuck Hunt, which reveals his affinity with George Grosz.


»Becher is a sharp-tongued storyteller, a moralizing tale-spinner. (...) His changing of themes is downright virtuoso - from biting satire to comedic-grotesque dialogue.«
Augsburger Allgemeine

»I was quite impressed with the New York Stories. Once more, a firework of language.«
Eva Menasse, Deutschlandfunk Kultur

"Becher proves himself a masterfully entertaining narrator who treats the trauma of exile in a period of dehumanization with a pointed pen."
Ute Büsing, rbb Inforadio