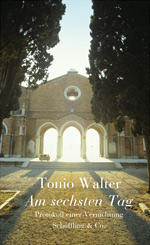 Tonio Walter
On the Sixth Day

A Record of Destruction
fiction

In a villa near Genoa, lamps sway as if moved by an invisible hand, light bulbs shatter and stones fly through the window even though there's no-one to be seen outside. Luigi Scalfaro, head of the household, asks for help from Professor Wiesthal, a German expert in parapsychology. The professor witnesses the ghostly phenomena and encounters an enigmatic family. Young Viola is always present when something strange happens. Her father Luigi scratches his face in his sleep, while his wife Donatella seduces their German guest. The housekeeper is closer to the family than seems appropriate for her position, and Jessica Scalfaro, Luigi’s first wife, was killed in a car accident under mysterious circumstances. Soon the professor, following his nose for crime, finds himself plumbing not only stone chasms but also the depths of human nature.

AM SECHSTEN TAG is the masterfully constructed tale of a crime in which desire, extraordinary mental powers and a conspiracy between two women are fatally intertwined.

»AM SECHSTEN TAG is a truly original and elegantly written mystery thriller that ventures off the beaten tracks. (...) Subtle descriptions of the beautful Italian landscape stand in poetic contrast to the abysses of the human soul portrayed in this novel. An excellent mixture.«
Hessischer Rundfunk (hr1)

»A literary gem. (...) Framed by a lush mediterranean flora, plenty of culinary pleasures and well-placed interspersions of Italian in the dialogues, Tonio Walter unfolds a sophsticated story about taking revenge by unusual means.«
Die Presse am Sonntag (A)

»This could be turned into a great film. A thrilling plot, spectacular effects and a great ending. The author already provides a lot of imagery. Tonio Walter obviously enjoys opulent descriptions, he expertly manages to pull us into his game.«
Neues Deutschland

»This author knows how to capture the reader with the dark sides of human thinking and acting.«
Ekz Bibliotheksservice