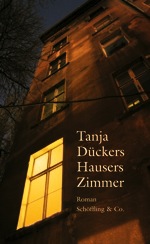 
West Berlin 1982: A leaden year. At the end of the Cold War, re-unification seems inconceivable. A divided city in no man’s land, with bullet holes and ruins, Berlin is both island and front line city, encircled and cold. Its inhabitants retreat into the caves of their back-court corners and old tenements.

The young narrator Julika Zürn dreams herself away into the wide world, to Patagonia. And with just as much longing she watches biker Peter Hauser in his room in the house opposite. In the family’s big, labyrinthine apartment Julika clears a way for herself through the rampantly expanding art collection of her left-wing, intellectual parents, she roams the western half of the city and makes her own sense of the world. And during her sleepless nights Hauser’s orange-lit window casts its spell.


»For a long time she was considered an author of the Berlin subcultures, then quite suddenly she stood for a new seriousness in literature.«
tageszeitung Berlin

»Tanja Dückers develops a Poetics of the Extraordinary as her literature explores people’s lives and secrets.«
Süddeutsche Zeitung

»Julika sounds like Holden Caulfield’s younger sister as she speaks up to explain to the fierce critics of the 1968-generation that even our 68-parents are just humans – and mostly well-meaning after all.«
Süddeutsche Zeitung

»Tanja Dückers has written a novel about growing up, set in an magical place that, with the fall of the Berlin Wall, had entered a process of disintegration. This quality makes Julika’s a timeless story, and it captures a Berlin that will never be the same again. Like a fading polaroid, Tanja Dückers has preserved a moment in time while its outlines were still slightly visible.«
Frankfurter Rundschau

»Tanja Dückers pays a lively tribute to the divided half-city of Berlin of the early 80s.«
Literaturen

»The immense quality of this comprehensive novel lies in its maelstrom-like style of narration, which allows the reader no time for reflection but drags him deeper and deeper into the action.«
Die Rheinpfalz

»With HAUSERS ZIMMER, Tanja Dückers has produced the ultimate Berlin novel that pictures the West Berlin of 1982 with a charming and relaxed, yet thoughtful attitude.«
Der Tagesspiegel

»The narrator, young Julika Zürn, shows a great sense of humour as she reflects on the microcosm of her apartment building that works like a mirror for the idiosyncracies of West Berlin.«
Berliner Morgenpost

»HAUSERS ZIMMER is an entertaining study about generations and society, which shows a completely different, but nevertheless very interesting picture of Berlin.«
Westfälische Allgemeine Zeitung

»Tanja Dückers took a very close look - accurately she records characteristics and situations which are described with a slight touch of understanding irony. (...) Tanja Dückers is an author with a fine, non-harming humor, which reveals weaknesses, but does not judge too hard. (...) In apposite, often short and amusing sections she characterises West Berlin's former island-like situation.«
Westfälische Nachrichten

»Tanja Dückers paints a portrait of a city that seems to be cut off from history, that has come to a standstill, neither at home in the past nor in the future. A place without identity, and therefore, full of freedom.«
Südwestrundfunk: Literatur im Foyer (TV)

»A bittersweet coming-of-age story from West Berlin, 1982. Told lovingly, accurately, and with a sharp pen.«
buchjournal

»A very readable adolescence novel from the center of the Cold War.«
Prenzlauer Berg Nachrichten

»With stylistic confidence and laconic irony Tanja Dückers draws a portrait of a smart young rascal in the former front city of Berlin.«
BRIGITTE