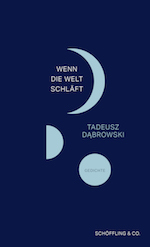 Tadeusz Dąbrowski
As the World Sleeps


In motels, at the shopping mall, and on Skype; in Gdańsk, Zurich, and Manhattan—Tadeusz Dabrowski reads and writes as he goes. In his poems, he writes about modern love and life while also registering the aftershocks of past conflicts by allowing to read in Sarajevo as if in a book, calls for the liberation of prisoners, or decodes soldiers’ tracks on Prague’s Charles Bridge. Above all, Tadeusz Dabrowski takes a critical look at the im-pact of Catholicism, injecting a dose of poetic freedom into the discourse...
The selection in As the World Sleeps, translated by Renate Schmidgall, includes the volume Mean(s) of Expression published in Polish in 2016, and Scrabble, published in 2020, as well as new and previously unpublished poems.

In his poems, Tadeusz Dabrowski is what the French call le grand reporter. Tempera-mentally, he’s a realist but his realism is essentially poetic, not plaintive, and illuminat-ing. In their astounding profundity, his poems are a fitting response to the absurdity of our world. A remarkable poet! >> Adam Zagajewski