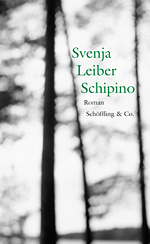 >> Finalist for the BDI Literature Award 2011

Schipino is in the back of beyond. It lies on a hill encircled by swamps, streams and lakes. It’s a place you might drift to, bring along someone or other, stay all of July or August, go fishing or picking berries and ponder the fate of Russia.

Jan Riba has fallen out of his world. He has locked up his office in Germany and got on the train to Moscow to visit his friend Viktor. Together they have come to Schipino, made themselves at home in the hayloft and fitted in with the lives of the others.

They have been coming here for years. Some have stayed for years. There’s Vassili, the moody researcher, beautiful as a woman; bald-headed Pavel and skinny Anna; Tolik with his piano; Darya who in her sorrow sews clothes and the mysterious Lilya, who comes and goes in the wooden houses like a fleeting guest and dreams of Moscow.

And all Schipino is waiting for Masha, whose fate seems to be inseparably bound up with this place.

Svenja Leiber is a story-teller who can conjure up landscapes, moods and situations in a few words. SCHIPINO is a novel of the search for breathing space in breathless times, which looks deep into the hearts of its characters.

»What Svenja Leiber will put her main character through is anything but a clearing process. Only the characters of Kafka – to whom the novel alludes clearly at the end – used to be so much ensnared in disorder, shame and guilt. Also strongly present is the nostalgia for Moscow reminiscent of Chekhov’s Three Sisters, including its concept of decentralisation. (...) SCHIPINO is a novel of search, set in a parallel world.«
Süddeutsche Zeitung

»With graphic, fresh images and unexpected twists the author awakens her protagonist from his indifference, sharpens his as well as the reader’s senses for this literary painting.«
Frankfurter Allgemeine Zeitung

»She is a competent narrator who knows exactly what to reveal or conceal at what point.«
Frankfurter Allgemeine Zeitung

»Leiber breaks into the contemporary German literary landscape with great narrative art. Her writing is laconic, accurate and, as a matter of course, untinged by kitsch and cliché. She succeeds with a rich language that does not require comparisons and metaphors.«
Berliner Zeitung

»This novel is not ›novel-like‹ in the usual sense of the word, but rather a perfect tableau (...), narrated in a portentuous language, full of images, pushing the reader into his armchair like a heavy wine.«
Der Freitag

»There’s music in the language of this author, who uses all the possibilities available to her. A poet of polished harshness and sparkling wit, cruel, tender and cruelly tender, who wants to know how a sentence is going to go, opening up a chasm, nothingness or a treasure of warm-heartedness before right away closing it again.«
Bremen Literature Award for Outstanding Promise, Jury speech

»Svenja Leiber reduces her sentences to what is absolutely necessary. Not an ounce of fat, nothing superfluous – but all the more power and urgency. She achieves a succinctness and precision which is rarely encountered in the many all too garrulous books of her young colleagues.«
Deutschlandradio

»Fascinating, how Svenja Leiber is able to create landscapes, moods and light just by her language.«
radioeins Book List

»The story also revolves around Lilja. Hidden underneath her difficult personality lies the mystery of Schipino that Riba solves at the end, yet without being able to save the young woman from her tragic death.«
Die Presse

»Shows a nature that is harsh, sometimes cruel and sometimes beautiful – just like the people who spend their summer there. Incredibly melancholic, but in a terse, poetic language that does not tolerate sentimentality, SCHIPINO tells about a place that seems out of this world.«
Westdeutscher Rundfunk

»For her novel, Svenja Leiber draws from her own view on the world. A macrocosm of materiality and resistance opens up (...), confronting the reader with life in Russia. A novel about leaving for a distant country, written like an adventure novel in the medieval sense of the term.«
Kulturexpress.de

»If asked to compare this novel to one colour, it would have to be a noble grey, like a fog of melancholy, silence and threatening mischief that encloses the scene at all times. Subtle hints engross the mind to an extent that it is impossible to stop reading until the very last sentence.«
Ostthüringer Zeitung