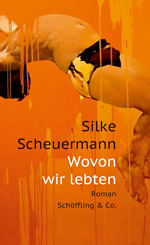 Silke Scheuermann
What We Lived On

>> A gripping novel about drugs, ambition, women and money – and cooking
>> For readers of Donna Tartt's The Goldfinch
>> NDR Longlist for Best Novel
>> Georg Christoph Lichtenberg Prize
Marten doesn't expect much out of life. He comes from a troubled home, and grew up in an environment dominated by black-market deals, punch-ups and sex. While going cold turkey he meets Peter, a former restaurant and club owner, who discovers Marten's gift for cooking.
When the two of them open the upscale 'Happy Rabbit' together, Marten is thrown back together with Stella, his first love. She's going to exhibit her paintings in the restaurant gallery. Brought up by a rich aunt, she seems out of reach. But now their fortunes are reversing: while Stella struggles to gain recognition for her art, Marten is becoming a popular TV chef – until his criminal past threatens to suck him back in.

Insightful and authentic, Silke Scheuermann has written a novel about our fragile dreams. Her gripping coming-of-age novel delves unflinchingly into the abysses of human nature, but What We Lived On is also a love story. In the end, it reveals some unexpected connections.


»Silke Scheuermann masters the high art of contemporary writing, capturing the particular climate, that special flavour of the present in her prose as well as in her poetry, making it more tangible and perceivable than in our daily routine.
Silke Scheuermann is an original poet, a ravishingly sensual narrator writing a lean, clearly structured, gently ironical and lively prose. Over and above, Silke Scheuermann is a highly intelligent and gifted author and a keen observer of her time and contemporaries.«
Georg Konell Award, laudatio by Uwe Wittstock

»The author follows her character into the depths of social classes, right into the criminal milieu with groups of thugs and Hells Angels, before she breaks through to art and sensuality.«
Süddeutsche Zeitung

»Scheuermann knows how to depict quite different worlds: from the drug scene to the industrial working world to the world of cooking and art.«
Tagesspiegel

»An outstanding book that is destined for the screen.«
Sören Kittel, Berliner Morgenpost

»Silke Scheuermann describes the making of a career in contemporary Frankfurt in all its nuances, providing courage and hope.«
NDR Kultur

»A story you literally devour, fast paced and full of tension.«
Schirn-Magazin

»In this complex coming-of-age-novel Silke Scheuermann sends her young narrator on a long journey to himself.«
BÜCHERmagazin

»A novel to be praised highly.«
Wiener Zeitung

»Masterly describing the big and the small world – with tragic moments, much fun and a surprising ending.«
Missy Magazine