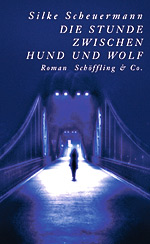 Silke Scheuermann
The Hour Between Dog and Wolf

»With her first novel, Silke Scheuermann has written her way into the top league of young authors. The story is, once again, of young women saddled with privilege and boredom. But the language is cool, underwater movement and its author as intelligent as she is subtle.«
Ulrich Greiner, DIE ZEIT

Two sisters meet again after a long estrangement. Ines, an impulsive artist, needs help, but is met with cold rejection because her sister has no desire to resume her old role as Ines’s rescuer. She wants nothing more to do with her sister’s world and yet increasingly is fascinated by it. At the outset of an affair with Ines’s boyfriend, she loses herself in a dubious, delirious state of happiness – which leads her back to Ines in an unexpected way.

DIE STUNDE ZWISCHEN HUND UND WOLF is Silke Scheuermann’s much-anticipated first novel. It vividly portrays the disorientation of a generation that makes demands for itself but cannot handle the everyday details of life. Sanctimonious schemes support their illusion of security, but in reality they often have little of life but a kind of abrupt withdrawal. Yet hope for change remains – a condition that Scheuermann depicts with melancholy and humor, succinctly and movingly.

»Silke Scheuermann masters the high art of contemporary writing, capturing the particular climate, that special flavour of the present in her prose as well as in her poetry, making it more tangible and perceivable than in our daily routine.
Silke Scheuermann is an original poet, a ravishingly sensual narrator writing a lean, clearly structured, gently ironical and lively prose. Over and above, Silke Scheuermann is a highly intelligent and gifted author and a keen observer of her time and contemporaries.«
Georg Konell Award, laudatio by Uwe Wittstock

»Silke Scheuermann tells this intimate novel from the perspective of her young female protagonist, whose view of the world is muted as through a glass cover, already sensing the broken pieces in every pane.«
Frankfurter Allgemeine Zeitung

»In her most recent novel, Silke Scheuermann has written her way to the top league of young authors. (...) A story that goes well beyond the sensibilities of young women, a story that builds touchingly on that great old theme: Love.«
Ulrich Greiner, DIE ZEIT

»A most beautiful, sensual and intelligent novel. (...) Silke Scheuermann has found a wonderful voice, cool and poetic, subtly melancholic, her language possesses an amazing power of visualization.«
Die Literarische Welt

»One perfectly harmonious book (...) due to the author’s cool power of observation that is sometimes ironic, and always enriching.«
Frankfurter Allgemeine Zeitung

»A tale of love – and of love-hate – coming forward in a unique composition of genuine sympathy and cool observation. (...) Scheuermann keeps a chilly distance, her sharp-sightedness is utterly fascinating.«
BRIGITTE

»The novel is set in a moral-free zone, where even love has assumed an incidental quality. It raises the fundamental questions: What makes a human? How to live rightly?«
Der Tagesspiegel

»She creates suspense by a clever array of characters, (...), setting up a complex economy of emotions that is thoroughly analyzed.«
die tageszeitung

»Scheuermann employs her poetic facility to good effect as she renders the confusion and frustration her generation faces as it attempts to define itself. (...) Non-Germans too are beginning to see the universality in her writing.«
Publishing Trends

»Silke Scheuermann reports from the cool milieu of young urban neurotics who strictly mistrust their feelings. Calmly and with an unerring feeling for nuances, she tells of an emotional descent into hell – hence the intensive suspense of her prose.«
Deutschlandradio

»An exceptionally complex story, and a highly accomplished portrayal of a complicated relation between two sisters.«
Der Freitag

»Silke Scheuermann portrays a lost generation that in fact has not lost anything. (...) A psychological closet drama.«
Sächsische Zeitung

»One literarily distinguished novel that sends a shiver down your spine.«
Kulturinfo

»DIE STUNDE ZWISCHEN HUND UND WOLF ties in with the cool and distant style of Judith Hermann so enthusiastically embraced in the nineties.«
Journal Frankfurt

»Her feel for language is amazing, and she is an incredibly able observer. (...) DIE STUNDE ZWISCHEN HUND UND WOLF is a private affair, turned into a piece of timeless literature by this author’s wealth of expression. Silke Scheuermann has written herself into the first league of contemporary fiction.«
Berliner Zeitung

»An atmospheric urban novel, inspired by the nouveau roman.«
Frizz

»The spirit of the 1970s-born generation could not be articulated more clearly.«
Dresdner Neueste Nachrichten

»It is that unpredictability of emotions that makes this book impossible to put down. Like in ancient tragedies, Silke Scheuermann’s characters are torn between the glossy surfaces of their world.«
Tages-Anzeiger

»Silke Scheuermann sketches the delusions and confusions of modern relationships. (...) The novel ends on a hopeful, surrealistic, utopian note. Written ever so tenderly, with just the right measure of emphasis, drama and poetry. This author will have a stake in the future.«
Westdeutsche Zeitung

»One of the most important young writers (...) – representing a new literary culture well-founded on intellect and form.«
Literaturen

»Immaculate prose, stylistically as well as psychologically. Scheuermann tells a tale of guilt and forgiveness, of sympathy and betrayal.«
Wiener Zeitung

»The damages of modern life nonwithstanding, Scheuermann’s dense, poetical prose lights up a shimmer of truth within everyday scenes, emotions, attitudes. All in her unique tone resounding between soft melancholia and brisk irony.«
The Jury, Grimmelshausen Award for Emerging Talent

»She is a master of scenic snapshots. Delicately and unsentimental, she sounds situations, characters, subtle nuances, capturing those turns of emotion in a delightful way.«
Frankfurter Rundschau

»Silke Scheuermann has developed her very own style of driving her narration forward, steadily yet with tiny interruptions. Sie suggests more than she actually tells, forming small narrative units, subtly touching buttons to create moods and a tangible story without ever weighing it down.«
Allemagne d'aujourd'hui

»Sensitively and indeed touchingly written. (...) This is a heartfelt novel which, despite its sad theme, many readers, women especially perhaps, will find illuminating and even uplifting.«
New Books in German