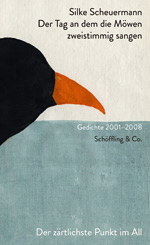 Silke Scheuermann
The Day the Seagulls Sang in Two-Part Harmony

Silke Scheuermann’s highly praised 2001 debut collection of poems DER TAG AN DEM DIE MÖWEN ZWEISTIMMIG SANGEN was described as »probably the most successful debut by a new poetic voice over the past few years« (Süddeutsche Zeitung). This was followed in 2004 by DER ZÄRTLICHSTE PUNKT IM ALL; poems in which excursions into the mythical sphere correspond with laconic descriptions of the present: »Silke Scheuermann’s poems are outstanding vehicles for the perception of our reality. They are stable, they risk emotion, are full of ideas and extremely efficient conductors of unconscious images.« (Frankfurter Rundschau)

DER TAG AN DEM DIE MÖWEN ZWEISTIMMIG SANGEN. GEDICHTE 2001–2009 brings together the two first volumes of poetry by Silke Scheuermann, the sonnets VOGELFLÜGE, which have only previously been published as a special edition, and a selection of unpublished poems.

»Silke Scheuermann is an emotional chronicler of the shy, hidden kind. In her poems she tells simple, apparently concrete stories which approach the mystery of life so directly that it can only be a detour.«
DIE ZEIT

»Silke Scheuermann, already awarded with the Leonce-and-Lena-Prize, gains increasing attention for her poems. She masterfully links mystifying dreamworlds to contemporary reality. As an observant sceptic, she counters emo-tional outbreaks with ironic twists and surprising metaphors. (...) Also worth reading is the epilogue by Dorothea von Törne who characterises Scheuermann as a magician of speech and praises her lyrical style as concise yet light, melancholic and ironic.«
ekz.bibliotheksservice