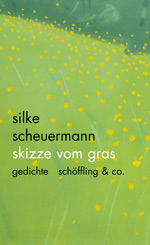 Special recommendation by the German Academy for Language and Literature

»Listen to me: this is the time / of which I speak, / time that flows languidly from the future.«

What Silke Scheuermann describes in her new collection of poetry is nothing less than a »time of disintegration«. Imagining an end to all conventions of past and future, she builds utopias. Her poems speak of a new, »second creation« and resurrect extinct species of animals like the dodo, the cave lion and the sabre-toothed tiger.

A sketch is an experiment, an image that still bears traces of the work that went into it; it is about capturing the ephemeral. In this sense Silke Scheuermann’s poems, too, are experiments, particularly the science fiction poems, which take up and further develop the genre of »utopian poetry« created by Nicolas Born in the early 1970s. She chronicles histories from the future, building on the fault lines running through the present: »It is true, one can be too lost in dreams / to survive.«

»Silke Scheuermann’s poetry explores the foundation of human existence. It convinces with surprising pictures and masterful compositions that are inspired by fairytales, myths and epochal works of visual art, though she finds her subjects in the real world. Skepticism and painful reflection counteract the tender, sometimes high tone of her poetry. Rather than a dreamlike realm, her poetical cosmos is a life-threatening territory shaken by the horrors of our present age. Silke Scheuermann’s work is unique due to its poetical, exciting and picturesque individuality, it is baroque and ultramodern at the same time.«
Hölty Prize, The Jury

»Silke Scheuermann’s poems dare to be emotional, are full of ideas and extremely good at evoking subconscious images.«
Frankfurter Rundschau

»The impressive mix of imagination, melancholy, wisdom and memory creates a relation between the little problems of everydays life and the significant issues of the universe.«
Frankfurter Allgemeine Zeitung

»Silke Scheuermann focuses on clear images. In her volume SKIZZEN VOM GRAS, with all her poetic force, she resurrects extinct animal species and proclaims the ›second Creation‹.«
ZEIT ONLINE

»SKIZZE VOM GRAS depicts the relationship between makind and creation in a surprisingly quiet, yet even more strikening way.«
Der Tagesspiegel

»Poems are delicate figures, anything but all-encompassing. What kind of space they are able to create! In case of Silke Scheuermann – one of the most pre-eminent German poets – she creates the entire history of civilisation. An impressive book of poetry.«
Tagesanzeiger

»One of the most beautiful books of poetry recently released.«
Frankfurter Allgemeine Zeitung

»SKIZZE VOM GRAS has an ambitious goal: Debating the human condition in times of artificial creation and genetic manipulation, thus standing out from her contemporaries. Imaginative and intense SKIZZE VOM GRAS is her best book of poetry yet: Sarcastic reflections are thwarting its often elevated diction, taking us back to the epic point where we should, in the age of technical hubris, remember again the possibilities of our humanity.«
Neue Zürcher Zeitung

»Open page 34 and read! ›Heavy Body‹ is a masterpiece. The sharp dualism of the described object is reconnecting emotions, thoughts, generations. Without a gesture of the sublime Silke Scheuermann manages to, in simple words, trigger off something indescribable big, showing what great poetry can do.«
Deutschlandradio

»Silke Scheuermann saves the nature poem! There is always empathy beside the sadness and belief in a second creation beside despair. The poems beautifully interrupt their own speech and reconcile themselves with the non-understanding.«
DIE WELT

»SKIZZE VOM GRAS provides moving, frightening and uplifting lyrical sketches in which Silke Scheuermann sometimes freezes time, and where the past, present and future coalesce into one.«
Westdeutscher Rundfunk (WDR 3)

»Silke Scheuermann writes wondrously and pithily rhythmized poetry. Her metaphorical language is as opulent as laconic. Aphoristically written lines boil thoughts and feelings down to their essence.«
Südwestrundfunk (SWR 2)

»In her incredibly intense, thoughtful and as yet the best volume SKIZZE VOM GRAS, sarcastic contemplations brilliantly contradict the distinguished tone of the poems.«
Badische Zeitung

»Poetry is an invitation to question our daily routine of perception. This also applies to Silke Scheuermann’s new volume that challenges readers for their own good.«
Österreichischer Rundfunk

»Silke Scheuermann’s vision of a ›second creation‹ is poetic, intense and rich in images.«
3Sat (TV)

»Scheuermann discusses man and nature, flora and fauna, art and artificiality and imagines an end to all conventions of past and future.«
FRIZZ Literatur