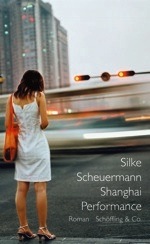 The famous performance artist Margot Wincraft works with models all over the world. When one day she accepts an offer from a small gallery in Shanghai to put on a new performance there, her assistant Luisa cannot see much in the project. To her China as an art market is past its sell-by date, and in the young gallery owner Lian, who organises everything for Margot, Luisa senses a competitor. On top of everything else her boyfriend has walked out on her and she herself is to blame because of her repeating infidelities. And so she does not understand either why Margot suddenly starts behaving so strangely in the fast-moving megacity.

SHANGHAI PERFORMANCE is an urban, sensuous and exotic novel about seeing and being seen, about art and identity. It captures the heartbeat of a hypermodern society which declares unconventionality to be chic, yet at the same time obeys its own unwritten rules. Silke Scheuermann reflects on images of women in the age of globalisation, on modern female careers – and tells the exciting story of an »eternal tragedy of guilt«.

»Silke Scheuermann’s new novel reads like a movie, it will sweep you away.«
Frankfurter Allgemeine Zeitung

»A highly readable novel about the dark side beneath the pleasant exterior. (...) Artist’s novel, romance, emancipatory novel, family story and travelogue: SHANGHAI PERFORMANCE is all this, and it is a lot. But Silke Scheuermann never loosens her grip on the narrative strings, employing a clear-cut, no-frills language (...). The deeper the story goes, the more addictive it becomes.«
Süddeutsche Zeitung

»A sobering account of modern women’s lifestyles and a biting caricature of the Anglo-Italian performance artist Vanessa Beecroft.«
STERN

»A novel about the tragedy of modern femininity. (...) Silke Scheuermann demonstrates a masterful command of style and language levels.«
DIE ZEIT

»Silke Scheuermann has brought a fascinating novel with her from Shanghai. It tells the story of a successful artist who is broken by herself and her questionable life decisions. (...) A highly engaging novel about China’s art scene and turbo-capitalistic stride.«
Die Literarische Welt

»For Luisa, from whose perspective the story is told, the weeks in Shanghai open a way out into a new, self-determined existence. (...) At the end, Silke Scheuermann dismantles the image of the postmodern woman she had so temptingly staged in the early stages of the novel. (...) Hence, as we read from the end, her cool and amusing trip through Shanghai turns into a dedicated contribution to critique of civilization.«
Frankfurter Rundschau

»If this novel was a movie, there'd be no better director than Sofia Coppola to capture the narrator’s exhausting soul-searching in elegant pictures.«
Wiener Zeitung

»Could there be a more suitable backdrop than the high-rise metropolis of Shanghai for this story that is so brave and cool, and yet so bleak, always revolving around the big question: Who or what do we live for? Science? The arts? Another person? Silke Scheuermann has written a novel around three radical women, and each of whom follows a different path.«
KulturSPIEGEL

»This book is about art created by women, the career dilemmas of women, the pecking order among women. These are issues that are not discussed daily in the newspapers and that – at least not in this combination – no other German novel has dealt with. Hence, an exciting book. Around these issues, Silke Scheuermann has composed a story that takes us to China’s Shanghai and brings us close to the light and dark sides of the international art business.«
NDR Kultur – Book of the Week

»Up to the tragic end, Silke Scheuermann plays with colportage-like elements that constitute an intriguing contrast to the narrator’s factual, observing tone and her analytic view of the milieu the novel is set in. (...) At the core of the book, however, is the immanent cruelty of a concept of art that views life simply as ›material‹. SHANGHAI PERFORMANCE is in a paradoxical sense both coming-of-age-novel and artist’s novel, as Luisa’s successful personal development is due to her veering away from the art scene.«
Deutschlandradio Kultur

»Scheuermann describes those elitist art circles as a milieu populated by aesthetically over-sensitive, neurotic people who show a strong need for recognition and are caught in fragile dependencies.«
Frankfurter Neue Presse

»Silke Scheuermann has turned the art business into a stage and its protagonists into literary figures.«
Monopol (art magazine)

»Her assured and well-versed language maintains the right balance between poetic imagery and precise observation.«
Cicero

»SHANGHAI PERFORMANCE enters a world of seeing and being seen and reflects about the image of women in the era of globalization.«
3sat (TV)

»In her new novel Silke Scheuermann draws three main characters, who in their very own way strive for fruition. All three are tightly connected with each other by their destinies and decisions. The novel is confusing and at the mean time fascinating because this closeness between the characters can be destroyed with deliberate distance at any time. (...) The precise and merciless picture of a generation and the story of three women’s destinies develops slowly but constantly and fascinates from the very beginning.«
Aviva-berlin.de

»Silke Scheuermann tells about the art of self-presentation and exposes, quite fittingly for our time, the supposedly unconventional biographies of hip urbanites.«
Glamour