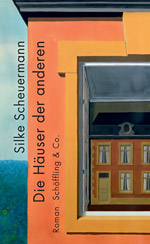 Christopher and Luisa have married and established themselves in life. He is a rising Biology Professor, she a successful art historian. They have swapped the old flat of their student days for a house on the edge of the city, a visible sign of their ambitions. It is here in the street on Frankfurt‘s Kuhlmühlgraben that their marriage must prove itself, here that they must measure their dreams against what they have achieved. But not everything can be brought about by will and self-dramatization, as they, just as much as the other inhabitants of the district, will have to learn.

In artful scenes, with side trips to Venice and New York, in DIE HÄUSER DER ANDEREN Silke Scheuermann tells of fragile desires, fears and hopes. Sympathetically and unsentimentally she describes what happens when people orientate their lives according to others, and their supposed superiority is shaken, or when they are surprised by happiness.

»A particularly good novel that combines the stories of the inhabitants. Scheuermann manages both to compress the whole drama of a human life in one subordinate clause as well as to describe the ordinary in a way that one can see the extraordinary which it entails.«
KulturSPIEGEL

»In a laconic and simple way Scheuermann narrates in loosely linked chapters about the banalities of everyday life and the abysses in the outskirts of Frankfurt.«
Focus online

»Scheuermann proves once more that she is a merciless humourist and sees right through the people.«
Frankfurter Rundschau

»Scheuermann writes about fragile dreams, fears, hopes and about what happens when people arrange their lives according to others and their supposed superiority begins to sway or if they are surprised by happiness.«
Börsenblatt

»In a cool and precise language Silke Scheuermann unmasks the set-ups and lifelong lies of her characters. Her brilliant novel retains a hold on the reader after the last page.«
Bücher

»The web of inhabitants of the ›Straße am Kuhlmühlgraben‹ is woven loosely with a light hand. Silke Scheuermann writes stylistically at ease in the rhythm of unbroken patterns of a world she seems to know. Thus, this novel can be read on various levels, it works in different ways, which exclude each other.«
Neue Osnabrücker Zeitung

»Silke Scheuermann’s new work is a novel of disillusionment, which leaves us enlightened.«
LesArten

»Breakup, disappointment, hope and destruction are close to each other and described in a combination of mockery and pity. As skillfully shaped as the leaps of time and changes of perspective are the cracks in this generation’s concepts of life.«
Literaturkurier Newsletter

»In this novel Silke Scheuermann proves her versatility. She plays games with the psychological crime novel, with leaps in time and intonation.«
Wiener Zeitung

»The fact that Scheuermann’s sarcastic and keen insight doesn’t lead to cruel revenge is prevented by the author’s empathy for her characters. Not to forget Silke Scheuermann’s humour that flares up here and there in the novel making it a reading pleasure.«
Frankfurter Neue Presse

»Artistically Silke Scheuermann takes the reader on a journey to the inhabitants of an entire street. With few, well-used words Scheuermann follows her protagonists and you notice in the clear, precise wording that she started her career as a poet, because she can still hold back wonderfully to concentrate on the essential things. The book is strongest when Scheuermann manages to find cracks in the perfect facades of the normal people.«
St. Galler Tagblatt

»In artful episodes Silke Scheuermann lets the most diverse characters clash, act with each other, and reveal their hopes and fears and experience how fragile their dreams are. Sensitive and subtle.«
Zuhause Wohnen

»Silke Scheuermann constructs her novel from changing perspectives. Skillfully she interweaves every individual fate. The literary appeal arises from the confrontation of the prevailing point by adding to the caricature-like, briefly told world of the upper class, the mocking gaze from the lower class. The misery waits behind the blank facades: whoever doesn’t want to be best needs to leave the game. This is shown impressively in this novel.«
Deutschlandradio Kultur

»Scheuermann’s characters are by all means human and likeable. The great strength of this novel is that the writer manages to get you to care about her characters.«
culturmag.de

»Scheuermann has pulled off something difficult. She has made the reader care about people living in suburbia. And by doing so, she is striking out in her own territory, doing something quite un-German, creating a tension by showing failure and despair right in the place you’d least expect to find it. The ›poet of suburbia‹, John Cheever, would have surely approved.«
culturmag

»The descent from a realistically drawn, bourgeois setting: Silke Scheuermann has arranged this topic magnificently.«
op-online

»DIE HÄUSER DER ANDEREN is a well-written and keenly observed journey behind closed doors and into other people’s lives. Its unsentimental and insightful characterisation makes for a convincing and thoughtful documentation of modern life.«
New Books in German

»Silke Scheuermann masters all styles and keys. A highly remarkable book. Silke Scheuermann captures something - a social reality, a current awareness in which the mid-thirties- and mid-forties-generations live.«
Süddeutsche Zeitung

»The author writes stylistically confident and bold in the rhythm of the unbroken pattern of a world she seems to know. Behind a fine veil of the usual she hints at developments of personalities and destinies. This is why the novel can be read on many levels.«
Hessische/Niedersächsische Allgemeine