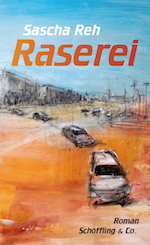 >> A gripping novel about a father on the abyss.

>> Sascha Reh writes about the fine line between revenge and justice.

>> A compelling story about masculinity at the moment of failure.

It is the hottest summer in decades. While returning from a family trip, a car accident destroys the life of the young travel blog creator Jonas Nimrod. The driver, Radomir Milic, a former Bosnian soldier and well-known attorney for family clans, was most like-ly drunk—but gets off scot-free. Barely recovered, he continues to launder money un-checked. Infuriated but helpless, Jonas attacks him online—prompting a duel that nei-ther can win.
In this masterful and atmospheric psychological portrait between digital Bohemians and the Berlin underworld, the prizewinning author Sascha Reh tells an uncompromis-ing story about the burning thirst for justice and revenge, regret and forgiveness—and men at the moment of failure.

»With 'Road Rage', the multi-award-winning authour succeeds in taking a close look into the psyche of two men of our time who, belonging to different milieus, nevertheless have more in common than is apparent at first glance.«
Dietmar Jacobsen, Literaturkritik.de

»It is rare that political subjects are treated with narrative ambition and remain exciting at the same time. Once again this is the case with Sascha Reh's work.«
Deutschlandradio Kultur

»Sascha Reh characterises both of his opponents with such convincing detail, it would seem you know them. Wrong. Things will still turn out quite differently.«
Claudia Ingenhoven, MDR Kultur

»Reh commands the vocabulary of all milieus and social classes in his novel convincingly, playfully and naturally.«
Stephan Opitz, Schleswig-Holsteinische Zeitung

»A gripping social thriller from beginning to end. The book is my summer favorite«
Meike Blanke, Horner Buchhandlung in Bremen