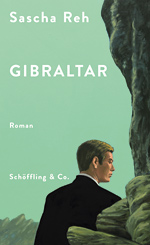 In an attempt to do a lucrative but highly dangerous speculative deal with Greek state loans, the investment banker Bernhard Milbrandt gambles with the core capital of the traditional Alberts bank. Rather than balance his debts, he flees to an apartment complex in Southern Spain – a ghost town left by an abandoned investment project. As he juggles feverishly with virtual sums, clues suggest that he isn’t alone in the apparently empty estate.
A hunt is on for Bernhard and the money that leads from Berlin and Frankfurt to Gibraltar. It turns out that the Alberts family business is deeply mired in personal and historical debts.

With narrative passion and precision, Sascha Reh molds the banking crisis into a haunting narrative. GIBRALTAR poses questions about guilt and responsibility that deeply affect our past and future lives in a global financial system.

»The author’s many gifts are almost frightening.«
DER SPIEGEL

»GIBRALTAR is a clever novel by a smart author who possesses an impressive knowledge of the old and the new Europe. Sascha Reh exposes our financial and moral values as the empty bubbles they are, and he does so in a sophisticated and resourceful writing style.«
Süddeutsche Zeitung

»GIBRALTAR convincingly shows how all people, including ourselves, are involved in the financial system and, in spite of all criticism, gain a profit from it.«
Der Tagesspiegel

»In an captivating way, the author depicts the thoughts of a speculator who makes high-risk transactions with Greek government bonds.«
Hessischer Rundfunk (HR1)

»A haunting narrative. GIBRALTAR stands out among this spring’s publications.«
Kulturspiegel

»A brilliantly written and immensely complex novel. A great achievement – maybe even the German answer to Jonathan Franzen's successful novel The Corrections.«
annabelle

»How can a banker gamble away multi-million dollar amounts? What kind of person is that? What is wrong with our financial system? Author and philosopher Sascha Reh tackles these questions from the perspectives of six different protagonists and presents a skillfully entangled, intelligent, thrilling and funny story – as complex as the world of finance itself.«
Sächsische Zeitung

»Sascha Reh presents a fascinating and informative economic thriller about a private bank and the family who runs it. A highly subtle and stylistically brilliant novel!«
Deutschlandradio

»GIBRALTAR breaks the financial crisis down into the cosmos of a banker familiy without providing definitive answers or reasons. Rather, in a highly analytical, subtle and humorous way, Sascha Reh focuses on the inner lifes of his protagonists.«
die tageszeitung

»Like in his highly praised debut novel FALSCHER FRÜHLING, Sascha Reh presents a multiperspective concept of narration. With each perspective of the six protagonists the story gets more and more absysmal - dependencies, manipulation and guilt come to light.«
Tagesspiegel

»Interesting characters, a turbulent plot, and decently strewn crime fiction elements make GIBRALTAR not only an exciting read, but, thanks to its narrative complexity, worth reading more than twice.«
Kieler Nachrichten

»Sascha Reh`s novel reveals his second profession as a family therapist. The psychological construction of the protagonists and their energetic relations to each other are his strong points. He creates characters, who have to cope with difficult origins, traumata and compensation. Full of ambition and envy, they suffer from social pressure to adapt.«
literaturblatt Baden-Württemberg

»What goes on in the heads of people who exploit the financial system to a degree where they and others necessarily go to the wall? Without sermonising or accusing, Sascha Reh shows how gambler mentality easily overcomes moral inhibitions.«
Salzburger Nachrichten

»German literature is rarely as contemporary as it is in Sascha Reh’s novel. (…) GIBRALTAR illustrates how everybody is involved in the financial system and, despite all critic, everybody profits from it - the novel of ›Generation Occupy‹.«
Der Standard