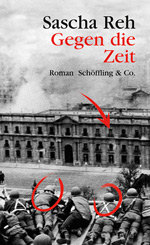 Sascha Reh
Against the Clock


>> Sascha Reh is winner of the Ruhr Literature Prize 2015

AGAINST THE CLOCK brings to life a historic experiment with surprising contemporary relevance, a dramatic story of hope and disappointment, of trust and betrayal.

At the beginning of the 1970s a spirit of change and optimism reigned in Santiago, Chile. The socialist president Salvador Allende was determined to lead the country out of its economic dependency and to alleviate the hardships of its impoverished population. He embarked on a bold project: factories in the virtually impassable Andean country were to be made part of a network, and managed by a central computer.
An international team, among them the young German industrial designer Hans Everding, was tasked with building the network. Hans leapt at the chance to play a part in the revolution and to fight for a fairer society, before a military putsch put an abrupt end to the dream. Everybody who had worked on the network was in mortal danger. Nobody could tell friend from foe, and the data they had collected could not be allowed to fall into the wrong hands.

»Confidently and passionately, Reh’s novel connects a psychologically subtle bildungsroman with the political and historical dimension of the coup against Salvador Allende.«
Ruhr Literature Prize, The Jury

»The almost journalistic use of language depicts the unpredictability and violence of the military with the keen realism of a film script. (...) This novel does not rely as much on the aesthetic means of literature as it does on the classical ingredients of love stories and suspense literature. It is thrilling and worth reading while giving an introduction to an almost forgotten political archaeology that shows astonishing parallels to the present day.«
Süddeutsche Zeitung

»An impressively researched historical novel introducing a largely unknown chapter of recent history, and a piece of contemporary literature that is both thrilling and rich in ideas.«
Frankfurter Allgemeine Zeitung

»Reh manages well to capture the strained athmosphere in the Latin American country during the time of Allende and the putsch.«
Deutschlandradio Kultur

»Sascha Reh demonstrates his skillful mastery of literary devices ... yes, AGAINST THE CLOCK is authentic in every way.«
Tagesspiegel

»Allende’s Chilean socialism was the unique attempt at building a totalitarian anti-capitalist society, which in this book is connected to a very recent desire for knowledge.«
Südwestrundfunk (SWR2)

»Although Sascha Reh (...) writes about a time he has not experienced himself, he shows great empathy and remarkable expertise.«
Brigitte

»In his depiction of the first days and weeks after the putsch led by General Pinochet Sascha Reh maintains distance and avoids pathos, thus enhancing the horror of the events. He has a remarkable understanding of the driving forces behind such a violent overthrow. His third novel AGAINST THE CLOCK is a social novel in the best sense of the word.«
Sächsische Zeitung

»Sascha Reh is especially keen to experiment with narrative possibilities when it comes to explaining the technical basis of Cybersyn.«
Cicero

»Reh succeeds remarkably well in clarifying the complicated processes and embedding them in a trhilling plot that leaps right in with the German protagonist’s dramatic flight on the day of the putsch.«
Wochenzeitung

»The novel skilfully leaps back and forth in time to tell a story as exciting as a political thriller.«
Der Westen

»The special mix of truth and fiction makes for a thrilling plot.«
fixpoetry

»In German literature it rarely happens that political subjects are approached with high narrative aspiration, suspense and a good sense for plot and arrangement of characters. However, this is yet again the case with Berlin novelist Sascha Reh.«
Deutschlandradio Kultur

»Sascha Reh precisely and lively writes about trying to introduce new technologies into a world of simple production processes. Past and present are woven together in a very elaborate way.«
Neue Zürcher Zeitung