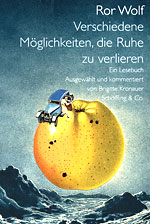 read the foreword by Brigitte Kronauer

The prose writing of the award-winning author Ror Wolf is as idiosyncratic as it is extensive.
Brigitte Kronauer’s carefully compiled and knowledgeably annotated selection makes his prose texts very accessible to the reader. The anthology is an invitation to make the acquaintance of a unique, distinctive author - or to rediscover him.

»Wolf’s texts are impeccably unacademic. There is no hidden philosophy, no professional wordplay, no scholarly wink with the eye. (...)
The surge of Wolf`s universe showed me an anti-world, bursting with energy, sufficient unto itself, whose by-product was to reveal with the greatest clarity the impoverishment and emptiness of the official one. Here was someone who treated the shards of reality and of stories in a way I had not thought possible.«
Brigitte Kronauer

»Seldom in German literature has the seemingly solid ground of traditional narrative been so earthshakingly shattered.«
DIE ZEIT

»A gem of poetry.«
Kleine Zeitung

»What gives the abridged reports and sketches of Ror Wolf their stability oder perhaps even their meaning, is solely his language – the carefully used syntax and not least its phenomenal clarity.«
Allgemeine Zeitung, Mainz

»In his prose, his poetry and his word and sound collages Ror Wolf inimitably combines linguistic artistry and grotesque comedy with a terse and compassionate perception of reality and its fundamental constants, fear and hope, pleasure and decay. He is a master of the cryptic and utopian play with the primal matter of poetry.«
Friedrich Hölderlin Award, Jury statement

»Wolf’s worlds are often as unsettling as those collages Max Ernst assembled from elements at once familiar, arbitrary and terrifying. Rarely has the puzzling been so entertaining (…)«
Frankfurter Allgemeine Sonntagszeitung