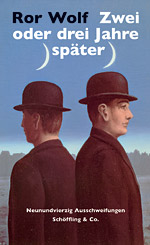 »Working in the traditions of Robert Walser, Robert Pinget, and Laurence Sterne, Ror Wolf creates strangely entertaining and condensed stories that call into question the very nature of what makes a story a story. Almost an anti-book, ZWEI ODER DREI JAHRE SPÄTER takes as its basis the small, diurnal details of life, transforming these oft-overlooked ordinary experiences of nondescript people in small German villages into artistic meditations on ambiguity, repetition, and narrative.
Incredibly funny and playful, ZWEI ODER DREI JAHRE SPÄTER is unlike anything else you’ve ever read – from German or any other language. These stories of men observing other men, of men who may or may not have been wearing a hat on a particular Monday (or was it Tuesday?), are delightful word-puzzles that are both intriguing and enjoyable.«
(Open Letter Books)

»The texts of Ror Wolf stand without comparison. He is capable of revealing the comical, the absurd element, the abysmal behind our everyday. His work stands as living proof that ›serious‹ literature may also be hilarious and entertaining.«
Horst Köhler, former Federal President of Germany

»Ror Wolf does not settle for the conventional concepts of realism, time, space, or causality. Instead, he picks his bits and pieces from crime stories, love stories, adventure stories, assembling them anew though his melodious prose. The result is thoroughly magical.«
buchjournal

»He shakes and mixes language like Jandl or H.C. Artmann; like Handke and Jelinek, he experiments with bits and pieces, with everyday trivia.«
Saarbrücker Zeitung

»Ror Wolf is (...) a great artist. Unlike the very famous writers of his generation, he refrains from composing edifying sermons, dramatic life stories, or even a political agenda, no, his texts are literature for literature’s sake, and they are exquisitely exhilarating.«
Berliner Zeitung