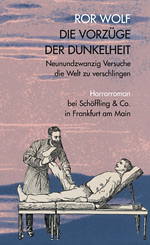 Ror Wolf
The Advantages of Darkness

The novel reports on the departure of the narrator into an unleashed reality, of his journey through rampant, seemingly apocalyptic landscapes inhabited by nameless, voracious creatures, and his meetings with mysterious ladies in station hotels and in beer halls.

The continents change within the batting of an eyelid. Detached from space and time a part of the unique universe of Ror Wolf emerges: a cabinet of curiosities at once nightmarish and fascinating, full of false bottoms, concealed doors and suddenly appearing chasms.

Ror Wolf’s writing is powerful, linguistically inventive and disturbingly comic – but is never merely eager to please. Beyond every rule of conventional literature he leads his readers into an adventure whose ending is uncertain, on an expedition into unpredictable worlds outside our reality.

»A demoniac book. Immortal as in the world of comics. Some even say: Demonic almost, as truly great literature.«
Neue Zürcher Zeitung am Sonntag

»If there is something like a vegetative literature, which both generates and later devours itself, then Ror Wolf is its diabolic gardener, who, with his new novel, created a specially beautiful carnivorous plant.«
Süddeutsche Zeitung

»He intermingles humour with the experimental, poems full of wit and prose full of accuracy for the words, radio play and collage, which he combines in a fantastically wonderful new combination.«
Frankfurter Allgemeine Zeitung

»This novel is a heavyweight.«
Frankfurter Allgemeine Zeitung

»Phallic elements here, anatomic aspects there, a fork in the neck of a beauty. You can let yourself be drifted away by the fantastic of these pictures, which are both bizarre or grotesque, idyllic and comic, a bit antiquated, always mysterious and sensational. This text is full of sensations. A travel, dream, adventure and discoverer novel.«
SPIEGEL ONLINE

»DIE VORZÜGE DER DUNKELHEIT is a brilliant ›horror story‹. Wolf belongs to the representatives of fantastic literature that disregard illusions of every kind. His magic of words expresses great mistrust of all stories that create meaning, without renouncing the pleasure of the text.«
die tageszeitung

»In Ror Wolf’s literary cosmos we probably encounter the last real adventurers on their way. A post apocalyptic loneliness encircles the hero, who, at times, believes that his body dissolves. Like always, the writer contrasts such disturbing states of consciousness with irritatingly precise parameters of reality: dates, weekdays, months, and geographic directions.«
Stuttgarter Zeitung

»On Ror Wolf’s laconic-comic-surreal pages you don’t meet horror evoked by familiar monsters and culprits. The horror lies in the exclusion, the confusion, the postponement of the world, the monstrous proportions that one can find in the fantastic collages as well. This is how a horror novel becomes a wonderful book in which everything can happen.«
Stuttgarter Nachrichten

»The literary potential of these texts about the end of the world which drearily devours itself, connects Ror Wolf with Lautréamont, Soupault and Vitrac. The cunning of the corresponding collages reaches from Max Klinger to Max Ernst. In every respect DIE VORZÜGE DER DUNKELHEIT impresses with language and pictures – a great success!«
Frankfurter Rundschau

»For Ror Wolf literature is more than the mere telling of a simple plot. His literature is art; a creation of language that devours the world to own it. He awakens expectations to disappoint them afterwards. He doesn’t know punch lines, happy ends are alien to him and a life that is not questioned appears uncanny to him.«
Augsburger Allgemeine

»Everything Ror Wolf creates by writing and in his collages in DIE VORZÜGE DER DUNKELHEIT belongs to the dark side of beauty and the traumatic realms. The author leads us into a world in which we do not want to be but the magic of the artful language and pictures attracts us and doesn’t release us.«
Münchner Merkur

»An artist of language and master of collages. Wolf plays with language and pictures, writes unusual, virtuosic novels and creates artistic collages. A synthesis of the arts full of black humour.«
Norddeutscher Rundfunk online

»Ror Wolf’s work is influenced by the écriture automatique of surrealism, by crime novels and adventure novels. That his most recent book should be classified as ›horror novel‹ is not surprising.«
Norddeutscher Rundfunk (NDR Kultur)

»Ror Wolf is a subtle worker of collages between forms of text, literature and picture. He has an affection for the play with literary genres and an eye for everyday commodities, the grotesque and the perils of life, the slanting of the moment. His prose reflects this point of view from the novel’s text to the miniature, no Biedermeier-like though. They reject the conclusive fable, never appear as life itself, but always as literary work of art.«
Bayerischer Rundfunk

»An exciting as well as disturbing masterpiece. A surrealistic horror trip on the highest linguistic level. Elaborately arranged this novel is an irritating reading experience and visual adventure that lasts.«
Hessischer Rundfunk (hr2 Kultur)

»Horror and beauty: Ror Wolf, grandmaster of (post-) avant-garde word plays, creates in his horror novel the picture of a fantastic, cataclysmic, splintering world; an exceptionally beautiful book for browsing. (...) Ironic and with great linguistic wit, Ror Wolf fathoms the boundaries and conventions of narration, leads them into emptiness and strikes rhetoric sparks.«
Hessischer Rundfunk online

»Presented in wonderful prose wanting to be read aloud. With relish the reader constantly loses his footing.«
Literaturhaus Bremen

»In Ror Wolf's hands, reality, which even in its horrors is dusty and consumed as a matter of routine, regains its shimmer and vibrancy, becomes short term, and we readers too become fresh, unfamiliar and ›perfectly sparkling‹.«
Brigitte Kronauer, Der Falter

»The influence of Peter Weiss, and especially of Claude Simon and Alain Robbe-Grillet on Ror Wolf is obvious. However, Wolf creates something new out of this style of the Nouveau Roman by not trying to employ it in the sense of Realism, but in the sense of a surrealistic montage.«
Der Standard online

»These illustrations are the best post-surrealistic collages of which you can barely get enough.«
Deutschlandradio

»Ror Wolf is a writer of little words, master of the bizarre and a lover of grotesque humour. A present, the richly illustrated horror novel. (...) Ror Wolf is the last writer who can create a timeless universality in linguistic asceticism. The horror of one’s innermost life – that is his work.
Deutschlandradio Kultur

»Ror Wolf has already done numerous journeys likes these to foreign countries. But this new one is more threatening and more kafkaesque than his previous stories.«
Norddeutscher Rundfunk (NDR Kultur)

»In a brilliant way Wolf’s works appear remote, curious and full of subversive oddity. They profit from the French Nouveau Roman as well as from Existentialism. At times the works resemble comic strips, western parodies or Max Ernst’s collages. Letting oneself being involved in this kind of writing means an adventurous ride in a roller coaster.«
Märkische Allgemeine Zeitung

»Ror Wolf is the last Mohawk of the pun, which in the 50s and 60s flourished in the so called experiemental literature and was buried at the same time. Only someone like Ror Wolf was able to continue this kind of writing – without concessions to the reader, but nevertheless smooth, full of black humour and occasionally oppressing darkness, which passes itself off as being easy: like a child playing its game.«
Österreichischer Rundfunk (ORF ex libris)

»Ror Wolf is a master in creating reality through language, the concentration of his poetic concept.«
Westdeutsche Allgemeine Zeitung

»You devote yourself to his poetical fantasies and have to watch out extremely not to get lost in his poetry and in his abysmal collages. Ror Wolf’s texts cut in your skin, mirror, contort and before you can turn around you are part of his ›famili‹.«
Hessischer Rundfunk (hr 2)

»His prose is discontinuous, phantastical, stunningly musical, its lines of words and sentences resilient and unsettled, cinematic – Ror Wolf’s love for Jazz and cinema, for slapstick, Buster Keaton and Laurel and Hardy is always noticeable.«
junge Welt

»You open his prose and you are enchanted by beaming sentences. Ror Wolf belongs to the most important German language artists and narrators of the present. A question for motivation, sense and probability does not come up. Words, pictures, contractions, the slipping away, the germination and the quenching, all this triumphing in high speed over conventional narration.«
Der Falter online

»Ror Wolf is the great artist of language and master of grotesque humour.«
Homepage of the city of Darmstadt

»Ror Wolfs prose is unique and comparable with nothing and nobody and its fears are both attainment of pleasure and recognition of dreams.«
lehrerbibliothek

»Everything is porous in Ror Wolf’s new horror novel. Ror Wolf’s language is beautiful and this is what counts. The world is inside his head, language is his tool and fantasy makes everything possible. In this world of words rules endless freedom: Wolf’s writing necessarily opposes to reality even without being on a special agenda.«
konkret

»79 brilliant collages, colour-, shape- and fantasy wonders that together with the text emit hope out of an incomparable aura of libidinal herbality, crashed enlightenment and resigning romantic science-fiction. Captivating amalgams of autism, eroticism, mesmerism and alzheimerism. Thanks to this, one is looking forward to doom.«
Kommune

»A wonderful book, an event.«
Schädelspalter

»His prose is addictive and his poetry distinctive. Ror Wolf is an author who carries his readers away and instigates them to bold expeditions through the grotesque and surreal worlds of his fertile, bubbling fantasy.«
Radio Bremen

»Surreal, bizarre, grotesque. Where nothing is unlikely anymore and where absurdity emerges as self-evident, a room of narration as a process of persistent metamorphosis opens up, which is typical for Ror Wolf.«
Neue Zürcher Zeitung

»Ror Wolf presents a horror novel, which is beautifully illustrated. Yet, despite a few bats buzzing around, it differs from this genre. DIE VORZÜGE DER DUNKELHEIT is typical for Wolf, who has always been extracting humour from the unpleasant, in this case even from the most horrible aspects of life.«
Titanic