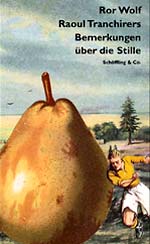 RAOUL TRANCHIRERS BEMERKUNGEN ÜBER DIE STILLE is the keystone to the comprehensive Encyclopedia for Intrepid Readers, a lexicon comprising purely of literature: it brings the reader to his or her senses, a radical examination of the world.

An indispensable book for all lovers of the unconventional elements of literature, complemented by the unmistakable collages of the author who has long-since enjoyed cult status in Germany.

»What would the world be without Ror Wolf.«
Frankfurter Allgemeine Sonntagszeitung

»Ror Wolf is a Hieronymus Bosch of story-telling and Tranchirer’s Lexicon is his ›Garden of Pleasures‹. (...)
Ror Wolf, one of the most idiosyncratic figures of experimental literature, is able like no other to lull the listener with the appearance of respectable middle-class and academic probity, but then to deprive him of the possibility of consistent behaviour and logic, torpedoing his sense of reality, and even causing him to experience the loss as a pleasure. To the delight of the audience Wolf systematically interrupts trains of thought, denying and breaking up the plot.«
Best Radio Play 2007 - German Academy of Performing Arts, Jury statement