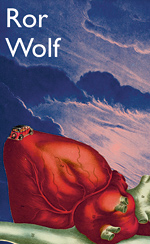 A masterpiece, and a landmark event for booklovers: new, as yet unpublished texts by Ror Wolf.

A unique work is complete (for now): RAOUL TRANCHIRERS ENZYKLOPÄDIE FÜR UNERSCHROCKENE LESER has been supplemented and expanded by RAOUL TRANCHIRERS NOTIZEN AUS DEM ZERSCHNETZELTEN LEBEN, a lavishly designed large-format volume of encyclopedic prose and collages printed in full colour throughout. From Ror Wolf’s studio comes a stunning capstone achievement and a masterpiece of the bookmaker’s art.

»Ror Wolf is a living contradiction: visionary and accountant, chaotic and pedantic at the same time. The fascination for his oeuvre grows out of this tension between strictness and playfulness.«
Neue Zürcher Zeitung