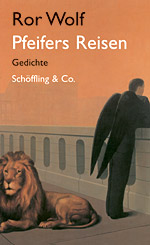 The long-anticipated first edition of poems, ballads and songs, most of which have never before seen print, from the years 1958 to 2006.
Ror Wolf’s lyrical work belongs to »the most delightful examples being published of what is simultaneously the most contemporary and humorous of poetry« (Robert Gernhardt).

»Ror Wolf is a pioneer of pop literature. Like Jandl or H.C. Artmann, he shakes and mixes language; like Handke and Jelinek, he experiments with bits and pieces, with our everyday trivia.«
Tages-Anzeiger

»Once again, these 150 previously unreleased pieces of prose bring to life Wolf’s absurd heroes from the last 40 years, in lines so resilent, rhymes so flexible as have - after Busch and Morgenstern – only ever been invented by Robert Gernhardt.«
Der Tagesspiegel

»We particularly recommend a careful reading of the closing verses - in which the author himself takes extra pride (and deservedly so) - because he always manages to end his poems with a laconism that leaves no questions unanswered.«
literaturkritik.de

»What would the world be without Ror Wolf (…) Rarely has the puzzling been so entertaining.«
Frankfurter Allgemeine Sonntagszeitung