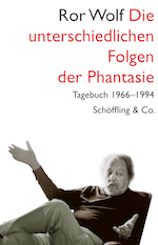 Ror Wolf
The Various Consequences of the Imagination

His long-heralded autobiography did not turn up in Ror Wolf’s estate but a huge bundle of unpublished diaries from 1964 to 1996 was found. As expected, Ror Wolf spares neither himself nor his fellows; he writes openly and unreservedly about himself, his colleagues, his friends and enemies, his publishers, his editors, and the literature business.
Readers learn plenty about his developing career; gain insight into the connections in his work and his successes and alleged failures; and get a close-hand look at the journey of one of the most idiosyncratic and imaginative writers of the last several decades. These previously unpublished texts supplement the RWW edition of the complete works with significant aspects and illuminate the life and work of one of Germany’s greatest authors.

»The diaries are the moving document of a long fight for recognition, they speak of German literature history«
Claus-Jürgen-Göpfert, Frankfurter Rundschau