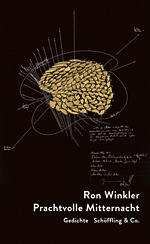 The new volume of poems by Ron Winkler begins with a total refusal, a boycott:

»to no longer take part (…) no longer arrange letters into something spliced together. (…) no longer write to //oneself. or whisper those nineteen syllable pet names in another’s ear, //which strip one naked, as soon as one speaks.«

Before going on to throw himself all the more passionately onto letters and pet names, onto »numbers and figures«. Yet at the same time he always maintains an ironic distance: »is a rose//and also more than a rose//and so at once no rose at all any more. any more. and also: never//no more: never no more//not.«

Ron Winkler has been admired for his poetic versatility. In his new work he becomes a minstrel: »I paid you further court, the cheek, I//I made waves for you.«
Winkler addresses the defragmentation of a language of love. Venice has got to put in an appearance here: As in a dream an »I« and a »you« pass through the city and the concepts associated with it.

»Ron Winkler is a speech world researcher of the 21st century – and one of the few who also deserves the description.«
DIE ZEIT

»Ron Winkler’s hunger for a poetry of surprises joins up with a conspicuous desire for exquisite word formations and a curiosity for unexpected combinations and constellations of weighty words with remote technical jargons.«
Die Rheinpfalz

»(...) for his consequent and unconventional lyrical writing. His poems are rocking our perception of the world and of language in a refreshing manner. At the same time the poems are featuring a humorous, verbally playful enthusiasm for experimentation.«
Basel Poetry Prize, Jury Statement