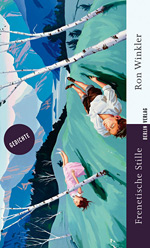 From the hymnically meandering city poem to the aphoristic two-liner, in Ron Winkler’s new poems we repeatedly come across those gleaming trouvailles which have prompted one critic to remark that they would be a good reason to form a pop group. »It must have been at the download shop,« begins one love poem of surreal modernity. Or has a lyric I ever remembered his parents as this one does in a poem entitled, on top of everything else, »my pathetic rural childhood«: »Mother was the first even variable we found./she ex-isted in inequality with her husband«?

Ron Winkler’s poetry is made up of such disparate images, his ability to integrate technical, scientific linguistic material in such a way that cool concepts establish striking connections with intimate sensuality. If most of the poems in his last volume were technically-minded nature poems written against the grain, nature has withdrawn from the new poems. What is left are grotesque, fantastical linguistic worlds, paradoxical vortices that seem to obey a dream logic.

»(...) for his consequent and unconventional lyrical writing. His poems are rocking our perception of the world and of language in a refreshing manner. At the same time the poems are featuring a humorous, verbally playful enthusiasm for experimentation.«
Basel Poetry Prize, Jury Statement