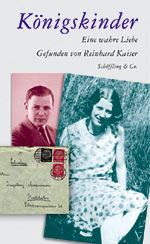 A fascinating piece of literary detective work about star- crossed lovers in Nazi Germany. Rudolf Kaufmann, a young Jewish geologist, met young Swede Ingeborg Magnusson in Italy in 1935, and the two quickly fell in love. They spent just a few days together before they had to part. He traveled once to see her in Stockholm; she went once to Germany. After that they had to make do with an exchange of letters – ordinary, sad, and dramatic at the same time – telling the story of a love that blossomed under traumatic circumstances.
KÖNIGSKINDER covers the period from 1935 to 1941, when Rudolf, having fled Nazi Germany for the apparent safety of Lithuania, was to disappear from view. Sixty years later, at a stamp auction, author Reinhard Kaiser bought a packet of envelopes that still held their original handwritten contents. The tale he discovered on the pages of Rudolf’s letters to his beloved ›Ingelein‹ immediately captivated Kaiser and he tracked down their story.

»A deeply saddening but also very touching book has arisen - a literary work of the utmost significance, because Kaiser pieces together text and picture with great finesse.«
Frankfurter Allgemeine Zeitung

»KÖNIGSKINDER shows poetically why in real life everything is more beautiful but also more tragic than in literature.«
Focus

»As unbelievable as life.«
Süddeutsche Zeitung

»It is the touching story of a great love, which had to collapse in the face of contempt for mankind of its time.«
Hamburger Abendblatt

»Kaiser’s gem of a story provides readers with a fresh, intimate angle from which to view the devastating effects of Hitler’s war on the world.«
Publishers Weekly

»Reinhard Kaiser might have written a novel based on these letters. But he’s accomplished something finer. KÖNIGSKINDER is a sort of archeology of the heart: beautiful, heartbreaking, memorable.«
Mary Dora Russell, author of A Thread of Grace

»The story is compelling, and the experience is similar to reading Anne Frank's Diary.«
School Library Journal

»KÖNIGSKINDER is a story that will haunt the reader long after the short book is over.«
The Historical Novel Review

»A tale of brief happiness, misfortune, and the vicissitudes of war and racism. The text of KÖNIGSKINDER does not even run to 100 pages, but the emotional distance covered there is enormous. (...) This is, at the very least, one of the saddest story I've ever heard. But it is also a fundamental and imperishable tale of what happens to two fairly ordinary people, who only longed to be together during one of the darkest moments in all of history.«
Jewish Exponent