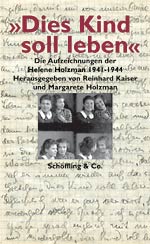 >> Winner of the Geschwister Scholl Award (award for books that celebrate in an outstanding manner civil courage, humanity, and open-mindedness)

>> Helene Holzman has also just been honoured with the title of »The Righteous Among The Nations« - the highest award Israel is honouring non-Jews, who risked their lives to save Jews during the Holocaust - by Yad Yashem, Jerusalem


This is the personal testimony of a woman who survived three years of Nazi occupation in Lithuania and escaped deportation to Russia’s Caucasus Region. Helene Holz- man: A courageous woman of German origin with a Lithuanian citizenship, living outside the Jewish ghetto but with strong ties to the ghetto’s inhabitants; half- Jewish but regarded as German.
Eager to distance themselves from the Nazi movement growing ever more threatening in Germany in the late 1930’s, Max Holzman, a German-Jewish publisher and bookseller, and his wife Helene, an artist, settled in the
Lithuanian university town of Kaunas with Marie and Margarete, their two young daughters. In 1940, Lithuania was incorporated into the ussr, and the Russians closed Max Holzman’s bookshop, forcing him to seek employment in Vilnius, where the family intended to move. When the Germans invaded Lithuania in 1941, the Holzmans found themselves trapped in a vortex of anti-Semitism and violence. Max and Marie, the couple’s older daughter, were arrested. Max remained missing. Marie was executed by the Nazis in October 1941.
Being determined to save her youngest child’s life and help fellow Jews outwit the Nazis and Lithuanian anti-Semites Helene together with her surviving daughter Margarete turned into a female Oskar Schindler.

Helene was paralyzed by the loss of her loved ones. Her own life, too, was endangered because of the public knowledge of her marriage to a Jew and Marie’s pacifist activities. But she refused to be victimized, being determined to save her youngest child’s life and help fellow Jews outwit the Nazis and Lithuanian anti-Semites. Helene and her surviving daughter Margarete disobeyed orders to move into the ghetto. Instead, Helene encouraged the ghetto inhabitants to flee. With the help of kindred spirits, she managed to provide many of them with hiding places and new identities, and helped them to relocating in safety. In 1945, the Soviet authorities in Lithuania begin deporting Germans — even those of Jewish descent — to the Caucasus region of Russia, a fate the surviving Holzmans escaped after receiving an early warning from a friendly apparatchik.

Until her retirement in 1957, Helene worked as a German teacher, first at Kaunas University where she was fired for speaking up for students who were considered political dissidents. She immigrated to Germany in 1965.

Helene began work on her three notebooks - a total of 705 pages - in September 1944. Margarete was 19 at the time, but didn’t read her mother’s notes until the 1960’s, after Helene had already died. Reinhard Kaiser, a writer, editor, and translator discovered this unique historical document and published it together with Margarete.

»As an authentic chronicle and as a deeply moving testimony it ranks close to the diaries of Anne Frank and Victor Klemperer.«
Geschwister-Scholl-Award, The Jury's judgment

»Without doubt this is a historic source of the highest quality.«
DIE ZEIT

»This book won't go out of your mind, it is a stroke of luck.«
Frankfurter Allgemeine Zeitung

»To be able to read Helene Holzman's notebooks now is a late Thank-you - and an appeal for future accomplice.«
Süddeutsche Zeitung

»Whoever listens to this Audio-Book will be seeing those times in a new light.«
Jury Audiobook Bestsellers-List

»I do not hesitate to declare this book as one of the most important this autumn.«
Hessischer Rundfunk

»This is a tremendous book, destined surely for translation into many languages and for correspondingly impressive sales.«
New Books in German