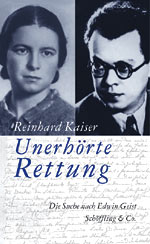 354pp with photos and illustrations

In December 1942, in the Lithuanian town of Kaunas, a composer from Berlin (a "half-Jew" in Nazi terminology) is murdered: Edwin Geist. Having been banned from his profession as composer by the corresponding Nazi-authorities in Germany he left for Lithuania in 1938 and made a rare sight there: a happy emigrant. For in Kaunas he not merely found refuge and new creative opportunities, but also Lyda - the woman he fell in love with and married in 1939.
Who was this composer Edwin Geist, who managed to escape from the Jewish ghetto when the Germans were starting to organise the large-scale murder of Jews in Lithuania? Who, even more remarkably, managed to free his Jewish wife, whom he so much adored, from the ghetto as well, through official channels even?

Reinhard Kaiser set out on a quest for any trail left by the composer Geist and traveled Germany, Lithuania, and Switzerland. He interviewed the few eye-witnesses who still have vivid recollections of Geist and his wife and unearthed documents rich in information. This book actually tells the story of two incredible rescues: first, Lyda’s rescue from the ghetto in the midst of the general terror, this hard fought-for rescue that allowed them at least a few more months of living together; second, the adventurous tale of the posthumous recovery of Geist's artistic legacy.

2002 saw the world premiere of an opera the composer had been working on in his Lithuanian exile. Geist himself was never to see this work performed: all he had heard of it was what he played for himself and others on the piano, or whistled to himself in the Kaunas ghetto.

»Kaiser chose for his depiction an intelligent composition and found a matter-of-fact contemplative tone. However, every page of his book is pervaded with a breathtaking suspense without giving in the temptation to add novelistic means of composition to the almost unbelievable material and its protagonists.«
Süddeutsche Zeitung

»An enthralling work, a posthumous hommage to a composer ostracized by the Third Reich authorities.«
SPIEGEL special

»Breathtaking case study of an artist in the Third Reich.«
Die Presse

»A precious and accurately investigated document about one of the many forgotten victims of the National Socialicsm.«
Buchkultur

»Not only a haunting – and deeply sad – individual portrait of an artist who was murdered by the Nazis, but also a tantalizing lesson in European postwar history and different modes of remembering.«
Deutsche Welle

»Kaiser's book is both affecting and utterly gripping. Combining biography with literary detective work, it provides a poignant account of the life and death of a gifted musician whose story and music deserve to be heard.«
New Books in German