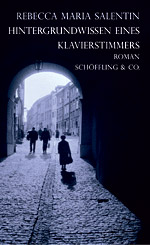 Rebecca Maria Salentin
The Education of a Piano Tuner


Krakow at the end of the 19th century: a landowner abandons his pregnant wife and doesn’t utter a word for the rest of his life; a piano tuner labors to coax beautiful sounds from beat-up old grand pianos and having succeeded, disappears without a word; plus a mother who is as cool and calm as she is unpredictable, a tropics-obsessed grandfather and two sisters who could not be more different from one other.
Twenty years go by, and then one hot summer things escalate.

In her debut novel, Rebecca Maria Salentin relates a monstrous family history in an astoundingly unique voice and through stunning imagery, creating a panorama of interwoven relationships that prove both humorous and extraordinarily moving.

»Salentin employs a fresh yet luscious style to tell the tale of a Krakow landowner surprisingly leaving his family and pregnant wife to retreat into silence. (...) Salentin finds the right words, scenes, and images to convey the slow decline of the outer appearances as well as of the inner life of her authentic characters.«
Münchner Merkur