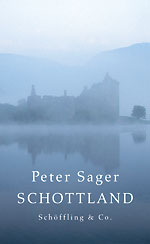 »The whole of Scotland has only five million inhabitants; that’s around half as many as in greater London. But what energy, what charisma this small nation on the edge of Europe has! Rarely have I had such a sense of well-being as when I was travelling round Scotland«, Peter Sager writes.
Scotland: it is the lonely Highlands and the five hundred islands of the Hebrides; it is the buzz of Edinburgh life, the first ever »World City of Literature«; and it is of course Glasgow, a place it’s hard not to sing the praises of, as perceived wisdom goes.
Scotland: it is also the country of wild rhododendrons that scale the hillsides, take valleys and meadows by storm and turn mountains into giant cushions of blue or pink from a distance.

Peter Sager’s SCHOTTLAND takes the reader on an entertaining path into a different world and delights us with a infinite variety of stories from this country rich in legend.

»Peter Sager is a competent and kind chronicler of Great Britain.«
»One of those very rare and fascinating travel books that bring to life a country’s rich cultural, social and philosophical heritage.«
Neue Zürcher Zeitung

»Wonderful. Sager’s description combines profound geographical and historical knowledge with the ability to bring landscapes, people and stories alive, just as if the reader had set up his recliner right in the middle of events.«
Süddeutsche Zeitung