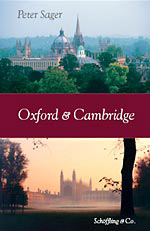 For almost 800 years, the twin capitals Oxford and Cambridge of the intellectual life of England have radiated their influence across the globe: not just political leaders, but the best spies Communism could recruit; not just church leaders, but the great heretics and reformers; and a host of literary figures from Lord Byron to Salman Rushdie.
Peter Sager draws on a treasure trove of facts, figures and anecdotes to provide a witty and detailed map of Oxbridge. He roams through the idyllic gardens and courtyards, uncovers the secrets that lie behind the college gates and supports his literary journey with colour photographs and maps, a glossary, list of useful addresses and guide to further reading.

»OXFORD & CAMBRIDGE is a unique combination of travel guide, history, biography and psychoanalysis of two towns that are not just places but states of mind.«
Thames & Hudson

»In a brilliantly entertaining way Peter Sager jumps from anecdote to anecdote (...) and manages to at the same time create a magnificent Who Is Who of British History of Ideas.«
Der Tagesspiegel

»And yet another story and another bizarre figure. No end to this but on the last page you want to cry out: More of this!«
Frankfurter Allgemeine Zeitung

»With his radiant, polished prose Peter Sager succeeds to create pictures only a rain shower, overcrowding of visitors or a locked gate can spoil.«
Frankfurter Rundschau

»German publicist Peter Sager proves once more that he is a competent and kind chronicler of Great Britain.«
Neue Zürcher Zeitung

»A lovingly researched book full of anecdotes and portraits, as unbelievable as some may sound.«
KulturSPIEGEL

»OXFORD & CAMBRIDGE is a funnily whimsical and very informative portrait, a wonderful narrative guide to the colleges.«
Badische Neueste Nachrichten

»Peter Sager has very well investigated and chats with an Anglo-Saxon sense of humour.«
DIE ZEIT

»Sager succeeds in capturing the beauty with such a magnificent language, breathing new life into even the most disdainful stone with such a richness of anecdotes – thus, a real visit is superfluous.«
Süddeutsche Zeitung

»This book is bubbling drolleries. Buy it! Read it! Be amazed!«
Der Standard

»Far more than a guide-book it surveys with style and humour almost every aspect of the two universities and manages to keep every account fresh and differentiated. All this is not knowledge skimmed off the surface by a visitor in a hurry. The book has the deceptive leisure and material density of the two places themselves. It is the work of a connoisseur of Britain.«
Oxford Magazine

»Sager’s book sits in a great tradition. He brings to his subject a sceptical foreign eye; but he is also an enthusiast, carried along by the richness of his material. (...) He writes in a sparkling and jaunty manner, and anecdote after anecdote tumbles from his fertile pen.«
The Times Higher

»A passionate and fabulously detailed book.«
The Rough Guide

»A brilliant book - I love it. Peter Sager has opened my eyes to my own country.«
South Wales Echo

»Sager’s prose flows smoothly and is informative and enjoyable reading, especially as he constantly presents amusing eccentricities (like the Oxford tortoise race in the sports section) together with his well-researched facts.«
Journal for the Studies of British Cultures

»He writes with perception, humour and a degree of distance mixed with an equal degree of involvement.«
Contemporary Review