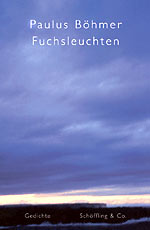 In FUCHSLEUCHTEN, Paulus Böhmer continues his body of writing: a collected body of lyrical work forming one single large book of poems, all the books of poetry one single book, all poems one single poem, one work which will never end. Paulus Böhmer’s poems are not moderate in length, they are long. The flow of words can go on over ten pages and beyond, becoming »a breathing form« (Thomas Hettche). And they take on a sound of their own: Böhmer’s poems have a symphonic texture, constructed according to rules of music. Always inherent in them is a sense of profound grief as well as defiance and tenderness. Paulus Böhmer: »If I could choose a god, it would be Eros. And if he existed, he would be in my poems: in his passionate bequest to the world (and to man, however dreadful Man may be at times.)«

»What makes this poetry so unique in the German-language sphere is the absence of a renouncing of the world, an absence of depression, and rather its devotion to life, albeit often devotion tinged with bitterness. This correlates on the material side with a decisive inclination for abundance. In aesthetics that which creates desire is called beauty. Böhmer’s poetry is a long - certainly furious, without doubt also sad - ever-surging song of beauty. Homer writes: ›The gods create trouble so that men have something to sing about.‹ «
Alban Nikolai Herbst