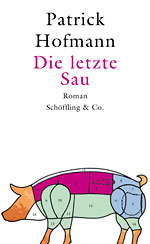 Saturday, December 5, 1992. Muckau, a village south of Leipzig. Neither the fall of the Wall nor the reunification has brought strip mining to a standstill. Though the collapse of the brown coal industry is foreseeable, the paddle wheels keep turning, the excavators have devoured as far as the village, the inhabitants of which are being relocated. The old Schlegels are the last. Their departure from house and home is imminent. That is why the family has come together to slaughter Albrecht’s last pig.

But in the morning the slaughterer who appears isn’t a man but a woman, and she casts her spell over the three generations of this East German family, who were once the pillars of the German Democratic Republic.

Little by little, as they carve up, prepare and consume the pig, personal histories and familial problems come to light, historical events and current problems are discussed, and a spectrum of attitudes toward the still unfamiliar present and the socialist past is revealed to the stranger – all this with much meat and sausage, noise, laughter and song.

»The symbolically charged comedy novel mirrors German collective knowledge about life in times of war and dictatorship, about survival by guile and frankness, in an existential butcher’s feast with its outrageous, sensual excrences.«
Robert-Walser-Preis, Jury Statement

»Hofmann’s debut looks into a rural lifestyle that has long gone beyond the pastoral. He knows better than to follow the cliché of the „pampered city slickers“ versus the seemingly „authentic, unspoiled“ village life – his perception is too fine, his writing too restrained to fall into that trap.«
Frankfurter Allgemeine Zeitung

»First off: This book is not for the tender-hearted. (...) It only takes a slight shift in what is expected, just one moment that the author cleverly uses to dismantle everything the Schlegel family ever held to be true about themselves and their history.«
BRIGITTE

»A sensuous family novel. (...) Pig processing meets political allusion, and has found an enormously gifted author in Patrick Hofmann. How he stages the appearances of the female butcher - part fairy, part whore, part witch - in the hyperrealistic surroundings of the Schlegel home, is beyond comparison. (...) One can approach this novel in all its details. Or simply read it in one go, as a sensuous, tragicomical German family story.«
Süddeutsche Zeitung

»A parable spanning three generations of an East German family that has long been overtaken by time. Hofmann’s narrative tone is both alienating and fantastic, combining not only various voices but also different perspectives by letting each family member speak for themselves.«
Westdeutscher Rundfunk

»The era of brown-coal mining and its consequences make the framework for a sensual, lusciously narrated book. Patrick Hofmann is one of those increasingly rare authors who actually have something to say. (...) As they gather for the butcher’s feast, three generations collide with their views on life, and a full century is examined.«
Ostthüringer Zeitung

»Never too lengthy, written with coruscating humour and language. Coming along with the butchering and carving of the last pig, family lifes as well as the recent history of German communism are explored and torn apart. One big question remains: What is the meaning of family, and how is this defined by the circumstances we experience? (...) An entertaining read that conveys the German ›turnaround spirit‹ of the era.«
literature.de

»For too long, East Germans have been cast as either Stasi informers or boozy neo-Nazis in the wider imagination. This novel offers a perfect opportuniy for an enterprising publisher to paint a fuller picture. (...)
Hofmann captures with precision and acuity the interaction and tension between the rural and the (post-)industrial in the Schlegels’ rhythms and rituals as timelessness rubs shoulders with a specific historical moment. (...) Humour becomes part of their defence mechanism against a world they increasingly struggle to understand.«
New Books in German