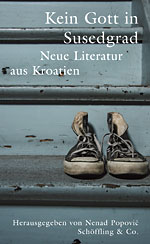 Nenad Popovic
No God in Susedgrad. Contemporary writing from Croatia

In the mid-1990's a generation of Croatian writers emerged, which had begun to write against the background of the collapse of the Yugoslav state. Their work is inconceivable without the war: Expulsion, siege, flight turned them into witnesses of inner and outer catastrophes and released an extraordinary creativity.

KEIN GOTT IN SUSEDGRAD collects texts by this generation, which had been believed lost, and which is now reviving Croatia’s literary landscape. Remote from nationalist pathos, their writing leads us into a postwar urban world, which is marked by fundamental ruptures.

With contributions by Sima Mraovic, Robert Perisic, Roman Simic, Igor Stiks and others.

»This is where contemporary Croatian literature begins.«
Frankfurter Allgemeine Zeitung

»Presents writers yet to be discovered, like the eloquent Igor Stiks, or the brilliant Zoran Feric, who manages without martial effects yet lets his protagonists suffer the most abysmal depths. (...) Prose of great clarity.«
Deutschlandradio

»A wild mixture of tragedy and revulsion, comedy and desperation, that is the keynote of this collection. The protagonists are jumpy, nervous, violent against themselves and against others. Love stories result in emptiness; sex is a dirty, tough business – like the war.«
Berliner Zeitung

»Authors from the 90’s movement that Popovic compares with the German ›Gruppe 47‹: Starting with small volumes, founding new magazines and a literature festival, they made space for themselves to write, breathe, and live. Just how multifaceted this space has become, this anthology shows, from sketches and prose snapshots to epic stories. (...) Most striking are those contributions that reflect the absurd shift within one’s perception of what is ›normal‹ in a time of continuing desaster.«
StadtRevue Köln