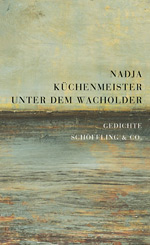 Nadja Küchenmeister
Under the Juniper Tree

»With a distinctive sense of form, Nadja Küchenmeister in her new book of poetry UNTER DEM WACHOLDER sketches atmospheric pictures of both lost and fulfilled moments conquering the space of tradition with ease and gentle determination.«
Bremen Literature Advancement Award 2015, The Jury

»Arise and eat!« said the angel to the prophet Elijah as he lay down to die beneath a juniper tree in the desert. This exhortation lives on in Nadja Küchenmeister’s new poems, which touch the heart of a deeply buried sorrow at the same time as they yearn for the light. Each night harbours an abyss, each morning is a promise.

With an instinct for apt and vivid images, Nadja Küchenmeister succeeds both in capturing brief snapshots of joy as well as sustaining long narrative arcs. She writes with miraculous attention to detail, sometimes intimate and tender, sometimes bitter and laconic. Her memorable, melodic language draws out long-forgotten sounds and images, interweaving them into a furious song of life and death.

am doleful today, the night was short. in the afternoon
i read your lines. as my eyes glided across the paper
i grasped not one of your words, i’m sorry. but perhaps
i should ask your forgiveness for that as well, there’s no time
to explain oneself. I don’t go outdoors anymore whilst my
supply of fruit gums lasts. evenings, with the sound turned
off, images flicker through the room, the moonlight is refracted
from the window panes: you know what that reminds me of.
below, some voices drag themselves home. later on my hand
is dwarfed, from which the writing seemed to flow of its own accord.
do you still know me? am doleful today, the night was short.
i never want to phone again or write a letter anymore
or see any of those photographs showing us together.

»The book of poetry UNTER DEM WACHOLDER by Nadja Küchenmeister is enchanting. Each of her gentle, mellow poems depicts an emotional atmosphere, a state of the soul. The young author is indeed venturous: Unagitated she takes on the tradition of literary and cultural history and has no need for iconoclasm. Instead she creates her very own style.«
DIE ZEIT

»Nadja Küchenmeister is one of the most surprising voices of the new poetry.«
Neue Zürcher Zeitung

»Nadja Küchenmeister possesses a unique poetic voice; though it sounds soft and serene, it seems to emerge from the purgatory between love and death.«
DIE WELT

»Nadja Küchenmeister's intonation sounds like an evergreen in the readers' ears, even though it comes along as unspectacular as possible and should rather be hummed than loudly sung or whistled.«
Frankfurter Allgemeine Sonntagszeitung

»Everything about these gentle, prodigiously touching words is in motion without leading to evaporation.
Sparks of light in the vale of tears: Nadja Küchenmeister knows how to ignite them.«
Neues Deutschland

»UNTER DEM WACHOLDER has to be ranked among the best of the numerous poetry collections published over the last years.«
Fixpoetry

»Nadja Küchenmeister is a virtuoso of the unspectacular. Her somnambulistic, precise images capture the distress of being and the bliss of everyday life.«
Roman Bucheli

»Especially the often wistful but never pretentious texts about love are deeply inspiring. With accuracy that is close to nature, she reflects moments of happiness and casts a spell with quiet tones that are refreshing compared to the global dins of the book market.«
Literaturhaus.at

»UNTER DEM WACHOLDER is a quiet yet relentless work permeated by profound sadness. Simultaneously it conveys a strong message: Get up and carry on.«
Kreiszeitung.de

»Nadja Küchenmeister follows up her great debut ALLE LICHTER (2010) with her second book of poetry UNTER DEM WACHOLDER effortless, or at least, seemingly effortless, for it probably wasn’t that easy to create this pull, this lyrical narrating mostly in tercets, that draws the reader through the long lines.«
Am Erker

»Nadja Küchenmeister includes both lyrics and poetry in her poems. Stefan George and Rainer Maria Rilke serve as reference points just as naturally (and confidently) as Terry Jacks’ hit song ›Seasons in the Sun‹.«
DIE WELT