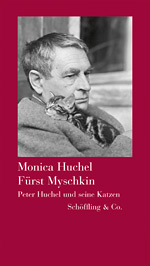 Peter Huchel and His Cats
cats
with lots of photographs

»I swear: the most beautiful cat book in the world.«
Klaus Schöffling

Husband and wife artists Monica and Peter Huchel lived together in Wilhelmshorst, near Potsdam, after the war. In 1971 they both left the GDR, living first in the Villa Massimo in Rome and later in Staufen in the Black Forest.
Wherever they went they were accompanied by their cats. Whether they were called Prince Myshkin, Bijou, Chéri or Chichi, it is impossible to imagine the Huchels’ life without them.

»Considered in terms of a reciprocal relationship, talking to cats seems to me to be an excellent way of learning mutual respect and tolerance. From the first, cats are alien creatures, yet their silent presence fills the house with a mysterious intimacy. This apparent contradiction reveals much about the nature of cats.«