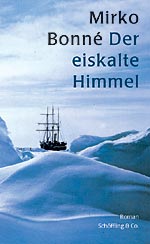 August 1914. While World War I rears its head across Europe, Sir Ernest Shackleton begins a daring expedition to be the first man to cross the Antarctic on foot. With him on his ship Endurance are 28 crew members, 69 sled dogs, a gramophone, a bicycle — and Merce Blackboro, a 17-year-old stowaway hidden amidst oilskins and sea boots.

Their journey into the ice is by way of the sub-Antarctic island of South Georgia. But the Antarctic summer is short, and their passage remains resolutely closed to them. In the Weddell Sea the urance is trapped for months in pack ice and finds itself delivered up to an uncertain fate.

Richly imagined and gripping right up the very last page, DER EISKALTE HIMMEL traces Shackleton’s legendary and heroic adventure through the ice and explores the relationships between these men who were lost to the world for 635 days.

US (English World) - The Overlook Press

»As proven lately by Daniel Kehlmann’s overwhelming success, these world-famous explorers still come across magnificently in modern literature, at least when transformed into the heroes of such an accomplished novel as Bonné’s DER EISKALTE HIMMEL. (...) This book is the perfect choice to lose yourself between its pages on a long, lazy afternoon.«
BRIGITTE

»Through the narrator’s ears, we witness the resounding cracking that heralds the doom of the ‚Endurance’. Breathlessly, we follow the crew’s struggle for survival amidst the grim solitude of the ice.«
Frankfurter Allgemeine Zeitung

»Evocative of Sten Nadolny’s The Discovery of Slowness. - Mirko Bonné succeeds in creating a lighthearted, devil-may-care atmosphere, while his ingeniously calm and articulate narrative rhythm definitely makes DER EISKALTE HIMMEL a book to lose your heart to.«
Deutschlandradio

»Best enjoyed with a woolen blanket and a cup of warming tea.«
Gala

»A grand adventure novel based on historical fact.«
DIE WELT

»A masterpiece. Brimming with humor and scenic beauty, there's not a single dull moment.«
STERN

»Bonné knows the ingredients of the adventure novel by heart, however, he does not stop there. (...) Not only does this novel weave an ambitious, gripping narrative, it is also a brilliant essay on time.«
Neue Zürcher Zeitung

»Within the best tradition of the classic adventure novel; an intriguing, enthralling book based on a true story.«
Frankfurter Rundschau

»Rich in atmosphere, narrative pace and laconic humour. A book to immerse oneself into, inviting readers to witness this dramatic journey, to experience the individual’s struggle against fear, hope, and solitude.«
Hannoversche Allgemeine Zeitung

»In one line with Ilja Trojanow’s Der Weltensammler (...) A great parable on ambition and failure, an insightful reading adventure, full of surprises.«
Tages-Anzeiger

»A brilliantly atmospheric fictional account of this astonishing excursion. (...) Bonné is not merely a highly accomplished writer but one whose richly intuitive imagination can delve into the minds of each member of the crew as they move from the everyday world they have left behind into an alternative existence of ice and isolation which comes to seem the only one. (...) An inspired, imaginative reinterpretation.«
New Books in German

»Our hands get chapped while we turn the pages to follow the adventures of Merce Blackboro. (...) Available in French for the first time, this young German writer has created a hallucinatory tableau that is both thrilling and startling.«
Le Figaro

»Bonné embarks with Shackleton on an heroic adventure from another age. He dreams it, he creates it, he breathes life into it. He is the entire crew, showing remarkable empathy for the characters.«
Télérama

»Even more than the expedition itself, the human touch forms the core of the novel. It adds zest to the survivors’ tales, and DER EISKALTE HIMMEL is much more than that. Shackleton’s leadership qualities, that certain amount of imagination, that feeling of affection that shines through the disaster.«
Libération