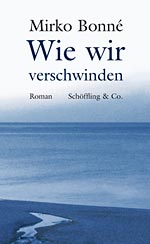 Longlisted for the German Book Prize

Mirko Bonné
As We Disappear

After years of silence Raymond receives a letter of his childhood friend Maurice, taking him back to their shared past: To Villeblevin in 1960, where they wit- nessed the car accident of Albert Camus. Memories of their youth and the death of an icon coalesce to a thrill- ing novel, presenting Mirko Bonné as one of our finest novelists.

»Bonné draws together (literary-)historical fact and literary fiction, making for one of the most striking juxtapositions German literature has produced in years. (...) A superb novel, marvellously constructed.«
Süddeutsche Zeitung

»A shimmering, summery novel that speaks of the youthful urge to leave and the elderly’s desire for reconciliation.«
Die Literarische Welt

»A scene of spectacular slow-motion shows (....) Albert Camus speeding towards one last existential experience. Beyond that, it is a story about friendship and betrayal, guilt and sadness. The melancholic charm of the province, the sage conversation of a gentle summer night, paired with stylistic ease – reminds of a Truffaut or Rohmer film.«
Börsenblatt

»With rare thoughtfulness and an almost existentialist gravity, Bonné’s books address life’s fundamental questions, including those of fidelity and betrayal, self-image and failure.«
Marie-Luise Kaschnitz Award, the Jury

»WIE WIR VERSCHWINDEN explores the art of living and dying, of coping with mourning and death, and it does so calmly and serenely, without any tragic pathos.«
Frankfurter Allgemeine Zeitung

»In Raymond, Bonné creates a character in which, quite irritatingly, sobriety and unapproachability are connected. And, as a confident narrator, he only ever reaveals so much of his story to allow us see the shadows, but never the objects casting them. (...) Starting off with a desire to vanish, his novel developes into a large-scale construct against disappearing.«
Neue Zürcher Zeitung

»An ingenious plot, reconstructing the history of a friendship that was not meant to last as well as the accidental death of Albert Camus. Absolutely recommendable.«
BuchMarkt

»Rarely has the French backwater been pictured so vividly in a German novel (...). The little village of Villeblevin that doesn’t even have a train station comes to live with atmospherical depth – with the nostalgic flair of the 1960s. (...) A wise, mature, philanthropic novel, striking a gentle note that matches the delicacy of the characters perfectly.«
DIE WELT

»Quite refreshingly, Mirko Bonné is not an author to be pigeonholed.«
die tageszeitung

»To disappear, as we learn from Camus, is both at once: liberating escape and resulting failure. (...) Bonné creates a literary fantasy on the patron saint of Existentialism, untinged by cliché, revealing his philosophical sources in beautiful clarity.«
Kölner Stadt-Anzeiger

»WIE WIR VERSCHWINDEN is a quiet, intensive, seemingly out-of-time novel
of friendship and hatred in the past and present. A book about love and jealousy, death and loss, but above all, life.«
literaturkritik.de

»Eine gentle, almost analytical elegy on what gets lost in the maelstrom of life.«
Saarbrücker Zeitung

»Just the description of this very moment, of the Facel-Vega sports car approaching the little town of Villeblevin at breakneck speed, driven by the nephew of the publisher Gallimard, how Mirko Bonné pictures the sounds produced by the car, and the perception of the speed monster by the people involved, it takes the readers’ breath away – and casts its spell. (...) An exceptional novel.«
Personal reading recommendation by Ulrich Wickert in »Wickerts Bücher« (NDR TV show)

»WIE WIR VERSCHWINDEN is a compelling book of memory. Its appeal lies in the subtle depiction of its elderly protagonist, his life and thoughts.«
Kieler Nachrichten