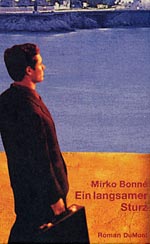 Mario Ries doesn’t know what’s happening to him. He’s standing alone with his suitcases at a Turkish airport. He’s just avoided a plane crash. On landing at Izmir he saw below him the wreck of the aircraft on which he should have flown. The fact that he’s still alive seems to him like »luck, awful luck«. His wife has just left him, and Mario Ries suspects that the unscrupulous boss of the Hamburg agency, whose Marseilles branch he manages, is behind it. On board the crashed plane was Jacqueline Fontaine, the head of the Marseilles Department of Culture. Mario Ries had an affair with her which blocked his career. Jacqueline has survived the crash. Why does she want to speak to him so urgently? Mirko Bonné writes grippingly and commandingly about a life coming off the rails within a few days. Without warning his hero loses the ground under his feet. Only in young, mysterious Marina does he find a kindred, reliable soul.

EIN LANGSAMER STURZ moves between humiliation and loyalty, shock and rebellion, intrigues and love. Mario Ries loses first his self-control and then his belief in the world. Instead he finds himself.

»It is to be hoped that Mirko Bonné will pull the ground from under the feet of many readers.«
Neue Zürcher Zeitung

»In clear and simple prose and with a sureness of touch Mirko Bonné relates the story of a life losing its balance within a few days. With great psychological insight he tells of spite and despair, of humiliation and rebellion. And in the end of the wonderful power of tenderness.«
Kölner Stadtanzeiger