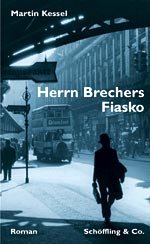 fiction
With an epilogue by the author.

There have been many ›Berlinromane‹, novels about the urban heart of Germany. Alfred Döblin captured it best, most famously in his classic, Berlin Alexanderplatz, but HERRN BRECHERS FIASKO is also one of the most important examples of the genre, and one of the most impressive documents describing the spirit of 1920s Berlin.

Infused with the spirit of 1920s Berlin, HERRN BRECHERS FIASKO is one of the great modern novels about the urban heart of Germany. It was a time of hope and hyperinflation, sexual liberation and repression, industrialization and unemployment, and constant political instability – with the shadow of fascism looming ever larger. Kessel’s novel draws upon the major intellectual and social issues of Weimar Germany and is a satire of the Berlin workplace and the white-collar workers of the city’s mushrooming bureaucracy.

»Kessel's scenes are strikingly modern. Many of the characters’ actions, complaints, and frustrations could easily come from a present-day office novel. The scenes at the office masterfully illustrate the pettiness, the numbing monotony, the often surprising discoveries - and also the many regrets.An unusual and challenging but very worthwhile (re)discovery.«
Complete Review / University of Wisconsin Press

»This novel, which pulls the whole of human comedy through the needle's eye of an employee's everyday life, not only is one of the great literary works of the 20th Century and a major contribution to the ›psychology of the city‹ and there in line with Döblin's Berlin Alexanderplatz, but also a project of disillusionment eerily relevant today.«
Neue Zürcher Zeitung

»In its analytical power and its linguistic capability to illuminate, this book surpasses everything written in the Weimar Republic about the world of the employee.«
Süddeutsche Zeitung

»A stroke of luck.«
DIE WELT

»Martin Kessel’s HERRN BRECHERS FIASKO is a major novel, and the time is ripe for it.«
Frankfurter Neue Presse

»The novel is a literary sensation, as explosive today as in 1932.«
Bayerisches Fernsehen

»One of the most important urban novels of the century.«
Handelsblatt

»The extraordinary status of the novel was recognised when it was first published in 1932. With the rise of National Socialism, as a book that describes Germany as ›a land of post office officials, head waiters and dutiful citizens‹, as ›the land of Venus with a sewing machine, the land of superhuman achievement‹, it was prevented from reaching a wider audience.«
Frankfurter Rundschau

»Martin Kessel has without doubt written a significant Berlin novel, that can claim its literary originality beside Döblin’s Berlin Alexanderplatz.«
Mannheimer Morgen

»The re-discovery of a masterpiece.«
Bergsträßer Anzeiger