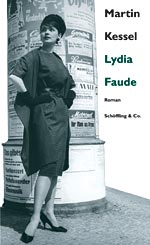 Following HERRN BRECHERS FIASKO, LYDIA FAUDE makes Martin Kessel’s second major novel: an encyclopedic, satirical sketch, a chronicle of Berlin scandals, the character comedy of an incorrigible illusionist. It deals with the flights of fancy of a woman destined for failure, a giant sermon that is at the same time intellectually stimulating and brash, amusing and vicious, about a woman who describes herself as an insoluble »concoction of stage-fright, dress rehearsal and premiere.«

The artists’ colony in the Berlin neighbourhood of Wilmersdorf and the wealthy scene in Nice immediately take to Lydia Faude, or maybe even more to her forthcoming inheritance of millions of marks. Adventurous plans are plotted from the cultural salon to the Aspasia film—but hopes are dashed as the inheritance—the pastry shop on the Kurfürstendamm—turns out to be a legend of its time, old-fashioned and suitable only for demolition. Attached to its name, steeped in tradition, and to the prospect of the inheritance are greed and covetousness, speculation and bold plans, deceit and criminality.

A society that is bright in every way is closing ranks and spinning intrigues, as everyone is out for themselves. In the end, only Lydia Faude is left empty-handed: »Am I to be a nothing, a no-one then?«

Kessel’s superb novel about Berlin in the early ‘60s is turbulent and tempestuous, witty and full of comment on issues of the time: a true pleasure to read.

»One cannot call the conception of this novel anything but outstanding.«
Süddeutsche Zeitung