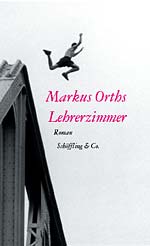 
Kranich is a newly qualified teacher about to take up his first post. As soon as he arrives at the school he is plunged into a nightmare kafkaesque world which has all the worst features of a totalitarian state. Very soon he finds himself caught between the Education Authority Police, Secret Security Officers and the CG, the Conspiracy Group, that aims to undermine the school system but only »verbally, since no one would want to put their own job at risk«. The four pillars of the school system, as the headmaster explains on Kranich’s very first day there, are »fear, misery, pretence and lies«.

Markus Orths, himself a teacher in his first post, has written a grotesque satire which is both absurd and extremely funny.

»Comically grotesque, subtly perceptive, or factually reporting, Markus Orths is a narrator of impressive style, a language artist. A lot more is to be expected from this fine writer.«
Lower Rhine Literature Award, the Jury

»A brilliant satire – full of pun and slapstick!«
Süddeutsche Zeitung

»A fantastic satire with touches of George Orwell.«
Buchmarkt

»Fantastically told: A touch of Kafka, a touch of apocalypse and an enormous amount of amusing madness.«
Kölner Stadtanzeiger

»It has to be said: This book is very funny.«
Der Tagesspiegel

»This book should be a must-read for anyone working in education.«
zitty

»Comparable to the anarchic humor of Monty Python with an absurd comic and a breath-taking speed. And on top of this it’s a linguistic pleasure.«
titel-magazin

Chosen among »Best German authors, most exciting books of the season.«
Allegra

»A wonderful satire, as funny as it is savage.«
Tribune