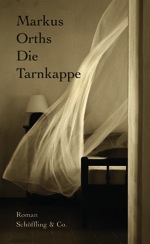 To be invisible. To see without being seen. To do things without having to fear the consequences: Everyone has wished that at some time or other.

Simon Bloch gets that chance. He has long ago buried his dream of a lifetime – to become a film music composer - and settled for everyday routine.
Then quite unexpectedly he comes into possession of a strange cap. When he puts it on, he disappears before his own eyes and feels »a crackling, something that took place deep inside him and at the same time on the surface, just as if everything hidden was being turned inside out and everything else outside in.«
Bloch’s life begins to come apart. At first he soaks up all the new possibilities. Yet soon his questions become more urgent and his situation disquieting: Who has passed the cap on to him? How does it work? And: What is it doing to him?


Markus Orths lends a fascinating literary motif his own exciting voice. DIE TARNKAPPE is a dizzying trip into nothingness, into what we can’t see – or don’t want to see.

»Outstanding, and absolutely worth reading.«
Wetzlar Fantasy Award, The Jury

»A felicitous novel about power and identity.«
ARD Morgenmagazin (TV)

»DIE TARNKAPPE is probably his best, but definitely his most thrilling book – you can only put it away after the very last page.«
Badische Neueste Nachrichten

»Markus Orths very specifically plays with attributes of the romantic fairy tale and deliberately blurs the borders between good and evil. DIE TARNKAPPE reads both like a thriller and like a comedy. Again, he introduces a protagonist who walks on the narrow path between normality and delusion.«
Freie Presse

»A scaringly good story with a philosophical touch.«
Cosmopolitan

»A clever mixing of horror elements, adventure and coming-of-age novel, a story of yearning that will leave you petrified.«
Deutschlandradio

»Markus Orths enters a whole new genre with this text, which is set somewhere between romantic fairytale and existential-philosophical thriller. (...) Orths' writing is original and fast-paced, as he enters the life of an ordinary man whose mind is twisted by the appearance of a magic cap. (...) DIE TARNKAPPE is a story of self-loss in the truest sense of the word - because if you cannot be seen by anyone anymore, how can you exist.«
Norddeutscher Rundfunk (NDR Kultur)

»From the description of a sedate daily life, the story soars into the heights of a gruesome nightmare. Basically, it is a great thought experiment. (...) Orths, a shrewd narrator, never loses his grip as he enters the realm of science fiction and fantasy, thus following in the footsteps of the great works of Black Romance like Dracula or Frankenstein. The novel takes up more and more speed as it approaches the finale. A virtuoso performance.«
Frankfurter Neue Presse

»A book that deserves many readers.«
Nürnberger Zeitung

»DIE TARNKAPPE is a book which still has an effect on you, even long after reading.«
Am Erker

»Psychological storytelling at its finest.«
Freundin

»Markus Orths has turned the fortune and misfortune of being invisible into the personal drama of a seeker.«
Westdeutsche Allgemeine Zeitung

»Not only is this novel set apart by a confident writing style, including flashbacks, reflections and an exciting plot, it also raises controversial issues: What is truth, and what is fraud? In what way are we influenced by our sense of guilt and power?«
Nürnberger Nachrichten

»This book is everything else but harmless: It is a complex thriller with elements, which are suitable to keep sensitive readers sleepless. The book is everything, a horror story, a psychological thriller, an existential-philosophical essay and an adventure story and still it appears coherent.«
DIE RHEINPFALZ

»A dark fable about corruption and greed for power in the style of Franz Kafka.«
FAZ.net / Hochschulanzeiger

»As a modern writer Orths employs elements of fantasy with a long mythological and literary tradition. He manages to visualize the psychological abysses of the seemingly colorless Simon Bloch. Orths’ greatest strengths are the catchy images and metaphors.«
Zeitschrift für Fantastikforschung

»An author with many talents. The novel starts cheerfully but soon leads the reader into abysses with increasing speed.«
Der Westen