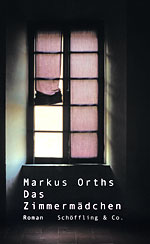 read the award-winning excerpt in English

Lynn Zapatek cleans rooms in the Eden Hotel and she cleans them very thoroughly indeed. When other chambermaids don’t even see any dirt, that’s when Lynn gets going. She stays longer and longer in the rooms, fascinated by the things she finds there. Books, notes, toilet bags, medicines. Cautious at first she becomes ever bolder. She doesn’t only take a good look at the strangers’ clothes, she puts them on too.

One Tuesday Lynn is nearly caught. There’s only one place she can hide: under the bed. With the guest on top. From now on she lies under the guests’ beds every Tuesday and eavesdrops on what’s going on above her. The guests are at once near and far away, as if they were invisible. And then, on the seventh Tuesday, something happens that could change everything.

DAS ZIMMERMÄDCHEN is the powerful portrait of a wayward, obsessive young woman. It is the intimate story of a seeker.

>> Unanimous praise for Markus Orths at the German Literature Days in Klagenfurt: His text about chambermaid Lynn convinced Jury members as »brilliantly narrated, from an amazing perspective, a screaming, remarkable text.«

Among the jurors, Ijoma Mangold wanted »to jazz up the text even
more« seeing as it touches upon the very »condition humana«: Because humans have caused utter disorder to nature, they are anxious to reestablish an order, which in turn results in insanity. In DAS ZIMMERMÄDCHEN, Mangold saw this »represented as the horror film that it is«.

»Against the airy current of the Generation Pop, Markus Orths sets his brilliant ideas and down-to-earth originality. (...) He is a master of those irrevocable elements of life, of the existential and the lapidary.«
DIE ZEIT

»Markus Orths is a narrator of impressive style, a language artist. A lot more is to be expected from this fine writer.«
Lower Rhine Literature Award, the Jury

»Lynn’s emptiness, her living on the lives of others go subtly under the skin. (...) a subtle, irritating contradiction.«
Frankfurter Allgemeine Zeitung

»The novel reflects the fears rooted in today’s mobile service society. It shows how we are seen and heard by all the helpers who make life easier for us, and whose eyes and ears we need to put our of our mind to enjoy the comfort that we bought.«
Süddeutsche Zeitung

»Charming and, from time to time, menacing. A look under the bed is strongly recommended next time you check into a hotel room.«
KulturSPIEGEL

»A perfect, disturbingly frank novel. (...) Markus Orths slips right into Lynn’s mind, he allows us to listen with her ears, and the narrow, dusty space between slatted frame and carpeting turns into a paradise of perception. Within this imaginary, limitless space where anything is possible.«
Frankfurter Rundschau

»Orths’ sentences are short, sometimes breathless, perfectly fitting the situation. He knows how to create supense in the reader. (...) An adventurous, hilarious and deeply sad story.«
Literarische Welt

»With a good sense of perception and in few, accurate words Orths decribes a fate both moving and agitating.«
Mitteldeutsche Zeitung

»The impressive psychogram of a lonely, disturbed young woman with a desperate longing for the life of others. (...) Markus Orths keeps the delicate balance between sexuality and inhibition, between voyeurism and desire. One thing is for sure: If you plan spend the night in a hotel, take a look under your bed first.«
NDR Kulturjournal

»On these few pages, Markus Orths unfolds the enourmously complex profile of a young woman walking the thin line between normality and delusion. (...)He masters an entire range of moods and moments while keeping the story unpredictable and surprising from start to finish.«
Titel Magazin

»Markus Orths tells a tragicomical story that is also a story of our time, seemingly effortless yet with all due severity. A novel that ensnares the reader right from page one.«
Allgemeine Hotel- und Gaststättenzeitung

»As nightmarish as funny. The fast-paced narrative shifts between the intimate act of Lynn’s eavesdropping on the guests and the claustrophobic feeling of her hiding place.« Saarbrücker Zeitung

»In his previous novels and stories, Orths has shown his marked preference for unusual characters. (...) With great empathy, he stirs his heroine, Lynn, through her quest for identity. He always manages to find a certain traceability, even normality, about her weird habits. Moving masterfully between her different moods, he adds a sense of vitality to his novel that is only rarely granted to Lynn herself.«
Volltext

»Rarely, if ever, has there been a more veritable obsession with cleaning in literature than in this novel. (...) The author noticeably writes a speedy prose. His sentences are short, sometimes breathless, appropriate to the portrayed situation. He knows how to transfer the tension upon the reader. Yes, not only does he turn him into a witness, who feels embarrassed by such snoopery in the beginning, but makes him an accomplice.«
Tages-Anzeiger

»Stealthily, we enter a universe of breeding fire, of quivering reason. Magnetized, we follow in the reluctant steps of the heroine, Lynn, taking on the roles of affected spectator and buffeted voyeur at the same, a thief of her gestures, her thoughts, her hesitations, her silence, the eccentric stubbornness she uses to invent her own fate.«
Télérama

»To destroy what is taken for granted, this is a recurring theme in Markus Orths’ books. Employing a reserved, simple style - which is what makes his text so interesting –Orths tells of the unrelenting will to live, be it through the life of others.«
Libération